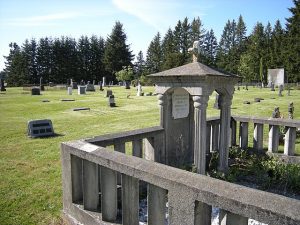 The Black Diamond Cemetery is just a short drive away from Seattle, located in the mining town of Black Diamond. The graveyard is known for some spooky haunts, with locals claiming that the ghosts of the miners buried there long ago still haunting the cemetery. There have been several claims of ghostly apparitions swinging their lanterns around, strange voices and whistling, and even a phantom horse weaving in and out of the tombstones. Some claim to have rational explanations for the haunts, while others are convinced that its ghosts. Paranormal investigators have surveyed the graveyard, and have produced mixed results, adding to the mystery. The Black Diamond Cemetery is notable for its history, being home to miners of diverse backgrounds, from countries like Italy, Russia, and Australia. The cemetery features the grave of several miners who died in an explosion and the victims of the influenza and smallpox epidemics of the early 20th century.

The Black Diamond Coal Mining Company was established in 1884 after the merger of two other mining companies in California. The company was huge, establishing three towns and a wharf in the Bay Area. The company first established itself in California before moving up to Oregon. Then they founded the mining town of Black Diamond in Washington, located just an hour south of Seattle.

The mines in Washington produced higher quality coal than in Oregon and California. So the mines in California were closed, and the miners and their families were moved up north. The area around the old California mines became part of the Black Diamond Mines Regional Preserve.

The coal mines in Washington prospered. By 1904, they were putting out between 700 and 800 tons a day. The prosperity attracted European immigrants looking to find work. People arriving from Wales, Italy, Ireland, Germany, Russia, and Australia all found plentiful work in the Black Diamond coal mines.

With demand for coal declining by the early 1900s, the company decided to sell the mines. The mines at Black Diamond, Washington, were sold to the Pacific Coast Company, which eventually closed the mines. The Black Diamond Coal Company then moved away from the coal business and into real estate, changing their name to the Southport Land and Commercial Company.

The Black Diamond Cemetery was established in 1884 as a graveyard for the coal miners and their families. It served as both a company and community cemetery, meaning it was also open to the ordinary residents of the area. The cemetery covers 3.5 acres and contains about 1,200 graves. The Black Diamond Cemetery was added to the National Register of Historic Places in April of 2000.

The cemetery is notable for its diversity, as many of those buried there are immigrants. Many of the miners came from Wales, Germany, Russia, and other European countries looking for steady work. One grave contains the remains of eight miners who were killed in the Lawson Mine explosion in 1910. The cemetery was maintained by a “graveyard fee” deducted from the miner’s paychecks.

At least one Civil War veteran is buried at the cemetery, as well as several children who died of the Influenza and smallpox epidemics of the early 1900s.

Strange Phenomena at the Graveyard

The Black Diamond Cemetery is known for strange and spooky happenings. The cemetery naturally has a haunted aura, being strangely hidden from the public view by rows of trees and thick vegetation. The only mark of its existence to passersby is a wooden sign placed by the local Scouts club.

The Black Diamond Cemetery is said to be home to the ghosts of the many miners who perished. On foggy nights, many have witnessed strange lights floating over the graveyard. They resemble lanterns, and many say that those are the spirits of the miners still searching for coal in the afterlife. Although, some attribute the floating lights to natural gas, a phenomenon called will-o-the-wisp. This is when swamp gas combusts and produces a cool blue flame. There are several documented cases in wetlands all over the world, such as the Saratoga Ghost Lights in Texas. Fairies, ghosts, and floating orbs seen in swampy areas are all attributed to will-o-the-wisp.

According to locals, the ghost of a white horse has been seen in the confines of the graveyard. It usually appears at night and has a glowing white aura. Black Diamond is a rural area, so horses aren’t uncommon. But the cemetery is surrounded by a chain-link fence. Historically, the graveyard was surrounded by a stile, which allowed humans to cross, but not animals. A horse finding its way into the cemetery is highly unlikely. Perhaps the horse belonged to someone laid to rest in the graveyard and has remained by his owner’s side in the afterlife.

Other unusual occurrences include disembodied voices and whistling coming from certain graves. Many say that it’s the ghosts of the miners who like to spook some of the visitors to the Black Diamond Cemetery.

The Black Diamond Cemetery has been the subject of a few paranormal investigations, although they haven’t found anything definitive. Cascadia Paranormal Investigations attempted to debunk some of the spooky claims at the cemetery. But there were a few things that couldn’t be easily explained.

According to CPI, flash photography taken at night causes reflections from the tombstones, as well as airborne particles, which can resemble floating orbs. The whistling commonly heard at the graveyard can be explained by the wind howling through the thick vegetation. And the supposed sighting of a horse was probably an isolated incident of a horse actually making its way into the cemetery, which is possible considering the rural environment.

CPI also employed their ghostly gadgets to gather evidence of hauntings at the cemetery. They attempted to communicate with the ghosts on their Spirit Box, and actually got a few responses. They then pulled out their Ovilus, a device that reads local EMF patterns to pick up on “spiritual chatter.” They picked up a few words, some of which implied violence. A few members of the investigation crew spotted ghostly apparitions, and the crew claimed that the entire time, they felt as if they were being closely watched by an unknown force.

Washington’s long history and dense forests make it a natural ghost hunter’s paradise. While many claim to have seen cryptids like Bigfoot wandering around the state’s wilderness, ghosts and spirits often go unnoticed. Many of the best ghosts stories happen in graveyards, and Washington is full of spooky cemeteries. The Comet Lodge Cemetery in Seattle is the resting place of the cities early pioneers and members of the native Duwamish tribe. Despite being one of the city’s earliest burial sites, the Seattle city government used the land for development, causing controversy among the local residents. Several graves were dug up and paved, and although a few of the graves were saved, only a dozen tombstones out of over 500 remain on site. This has stirred the anger of the spirits who now haunt the cemetery and the houses which were built over their graves. The Grand Army of the Republic Cemetery is home to Washingtonians who fought in the Civil War. Their spirits still roam the graveyard in full uniform, and many of their spirits appear to have just returned from battle, complete with open flesh wounds and missing limbs. The Bothell Hell House is one of the most haunted houses in the state, full of violently angry poltergeists. They’re known to toss objects around at random and even start fires. Their anger stems from the house being built on the burial ground of an Irish settler family who lived in the area over 100 years ago. Want to see more Washington state haunts? Check out the top haunted spots in the Evergreen State right here!