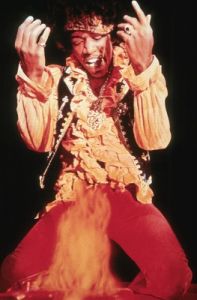 The Central Saloon has a special place in the heart of Seattle’s music scene. It hosted some of the most well-known acts to come from the city, including Alice in Chains, Soundgarden, and of course, Nirvana. Even before the grunge scene took Seattle by storm, Jimi Hendrix was said to frequent the bar. The Central Saloon rose from the ashes of the Great Seattle Fire of 1889, being built as the city was reconstructed. As Seattle grew, it became an incredibly popular bar, attracting miners, loggers, sailors, and fishermen with cheap booze and sex workers. Like many buildings in Pioneer Square, the Central Saloon is haunted. Centuries of history and good times have left a spiritual imprint on the bar. Ghosts and apparitions from the pioneer days all the way to the modern era haunt the place, and they love to spook the patrons. Strange shadows and disembodied voices are common in the bar, and the ghost of Jimi Hendrix is said to haunt the Central Saloon. If you’re lucky, he might even play a phantom solo.

In 1889, Seattle was a booming lumber town. Hence, everything was made of wood. The city leaders made good use of the natural resources available in the Puget Sound. The buildings, bridges, and walkways were all made of local timber. Given the region’s naturally rainy and humid climate, nobody expected fire to be a threat. But in June of 1889, Seattle was turned upside down.

It all started in a carpenter shop in Pioneer Square. An apprentice lacking in experience put a pot of glue to boil and forgot about it. He walked out of the shop, neglecting the flammable liquid on a stove in a room full of wood, sawdust, and turpentine. In just a few seconds, the entire room was ablaze. Then the whole block. In a few short hours, the entire city was on fire.

Buildings came down. Breweries and saloons exploded. The city was destroyed in less than 24 hours. It was an unusually dry summer, which aided the spread of the flames. Twenty-five city blocks were destroyed, along with four wharves and all of the railroad terminals. Despite being the most destructive fire in the city’s history, hardly any lives were lost.

The city leader wasted no time rebuilding Seattle. They mandated that all new buildings be rebuilt with brick. They also began the raising of Seattle’s city streets, creating the Seattle Underground and keeping future floods at bay. In a strange twist of irony, the fire actually helped the city’s growth. As supplies poured into the city to aid in reconstruction, the city’s population nearly doubled within the year.

Watson sold his restaurant to two local entrepreneurs, Mr. Jamison and Mr. Farland, who renamed the saloon The Seattle Bar. The Yukon Gold Rush was in full swing, and the bar took on a rugged reputation. The saloon served as an attraction for miners, gold prospectors, and loggers. The saloon also doubled as a brothel, which served to attract larger crowds. The Seattle Bar was so successful, the owners opened a second location, calling it the J&M Hotel and Saloon. In 1907, the franchise was sold to two entrepreneurs by the name of Mr. Master and Mr. Casey. The Central Saloon was born.

The Central Saloon was booming through the many western gold rushes. Not to mention that Seattle was becoming a major railroad destination and industrial center. As the city grew, the Central exploded in popularity. Pioneer Square was declared a historical site. The bar had become intertwined with Seattle’s music scene. Jimi Hendrix would frequent the bar in his early years.

In the 1980s, as a new genre was beginning to take shape, the Central took a central role (no pun intended) in pushing the Seattle music scene to the forefront. In 1986, Bruce Pavitt and Jonathan Poneman started up Sub Pop Records and signed two influential bands that brought eyes to the city’s thriving music scene; Green River and Soundgarden. Taking a cue from the deep, dark sound of the budding new rock genre, they called the new style Grunge.

Grunge had yet to be fully welcomed in Seattle; its gritty sound put it at odds with many of the city’s bars and music venues. The Central Saloon served as a place for the artists signed with Sub Pop Records and similar acts to play their tunes. Alice in Chains, The Melvins, Mother Love Bone, and Pearl Jam all got to showcase their music.

No Seattle music story would be complete without Kurt Cobain himself. Nirvana played their first Seattle show in the Central Saloon. Pavitt, Poneman, and the rest of the Sub Pop crew were there to see it. There were only ten other people in the room, and ironically, the crowd wasn’t impressed. But Kurt’s voice kept them hooked, and Nirvana went on to join Sub Pop Records. The rest was history.

The Central Saloon enjoys its status as one of the oldest bars in Seattle. Music is still “central” to the Central Saloon, being a major small venue in the city. The history of Pioneer Square and Seattle’s music scene are alive and well in this not-so hole-in-the-wall bar.

The Ghosts of the Central Saloon

Being part of the historic Pioneer Square district, one would naturally expect the Central Saloon to be haunted. Ghosts and spirits are abound in the area, and they love to hide within the century old buildings. Those who visit the Central Saloon may be pleasantly surprised by the apparitions. They tend to mysteriously appear and vanish all over the building. They’re mostly encountered on the mezzanine, the restrooms, and right up against the stage during crowded shows. They also like to hang out by the bar and in the staff offices.

The ghosts of the Central Saloon come in all types. Some are early Seattle pioneers, sporting burnt flesh from the Great Fire of 1889. Others are well-to-do business types and socialites from the Progressive Era. Then there are the grunge kids and rockers from the 80s and 90s. They all have their own personalities, and there are so many that you may never see the same ghost twice. Disembodied voices are common, as many spirits like to whisper in the ears of guests who they find particularly interesting.

Some say the ghost of Jimi Hendrix himself resides in the building. His ghost is said to inhabit several other places across Washington, and the world, so the rumors may or may not be true. He’s said to occasionally appear on stage, his transparent silhouette rocking the guitar for a few split seconds behind the main act. He’s also been spotted in the crowd during busy nights, as if to check out the modern-day talent. Those who spot him say that he smirks when recognized, and vanishes shortly afterward.

Seattle isn’t known as the city that never sleeps. That title belongs to New York. But there are a few souls that never get rest, and they live in the numerous haunted houses and hotspots that dot the city. Some are friendly, while others are downright hostile. University Heights is a wonderful community center in the University District near UW. The center offers performing arts education, language classes, services for the homeless, and even hosts a farmer’s market. But it’s also haunted. The ghost of a boy named Brian haunts the building. He died when an abusive teacher locked him in a closet as punishment. He passed away after having been forgotten about over the weekend. Now his vengeful spirit raises hell when someone ventures into his territory. Like the Central Saloon, the Louisa Hotel served as a musical hotspot for Seattle’s music scene, but this time, it was the city’s early jazz artists who brought the funk. The building also served as a boarding house for Asian immigrants and travelers from across the world. By the 1980s, the Louisa Hotel had become rundown, hosting several seedy gambling clubs, most notably the Wah Mee. It all came to an end when 13 people were killed in a mass shooting at the Wah Mee, the largest mass shooting in Washington State history. The ghosts of those who passed remain in the building, haunting the residents and tenants of the building. The Bothell Hell House lies just a few miles north of the city, and despite being a quaint new home, the spirits are restless. They’ve been known to set fires, write on the walls, and throw things across the room. They can be traced to an Irish settler family who lived in the area over a century ago. Want to see more Seattle haunts? Check out the top ten most haunted spots in the city right here!