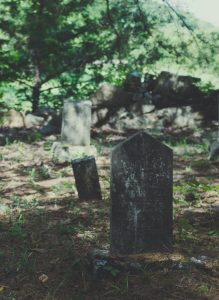 The Comet Lodge Cemetery is one of Seattle’s secret haunted cemeteries, located in Beacon Hill. Some of the city’s earliest settlers were buried here in the late 1800s, and before that, it was a burial ground for the Duwamish tribe. Due to the neglect of city officials, it was almost lost in the back pages of history. The city dug up a part of the graveyard, desecrating tombstones and overturning human remains, all to build a few houses and a dog park. Thanks to the efforts of several concerned residents, the Comet Lodge Cemetery was saved…sort of. Out of the over 500 people buried in the cemetery, only a handful of graves remain. The spirits of the Duwamish and early pioneer families are definitely displeased with the current state of their burial site. Ghosts often make their appearance known in the area. Some of the nearby residents have even reported strange paranormal events in their homes, like flickering lights, disembodied voices, and full-on apparitions.

Before Seattle was Seattle, the area was home to the Duwamish peoples, who are part of the Coastal Salish tribes of the Pacific Northwest. In 1800, the area now around Graham and 23rd Avenue was designated the Old Burial Grounds for the Duwamish Nation. As white settlers poured into the Puget Sound region, there was an increasing need for burial plots and cemeteries to bury their dead. In the 1880s, the land encompassing the burial site was sold to the Maple Family, one of the first pioneer families to arrive, landing by boat on Alki Beach.

Rise and Fall of the Comet Lodge Cemetery

At first, the Maple family used the plot as their own personal graveyard, though other pioneer families had their bodies buried there as well. The land was divided up in 1908, with part of it being sold. Burial plots were then sold to pioneer families until the 1930s when the cemetery fell into disuse. By then, over 450 pioneers along with hundreds of Duwamish tribespeople had been buried in the Comet Lodge Cemetery.

The burial site was primarily used for residents of Beacon Hill and Georgetown, which at one time was a single, uninterrupted neighborhood. When Interstate 5 was built in the latter half of the 20th century, it isolated Georgetown from the rest of the city, and the Comet Lodge Cemetery ended up right at the periphery of the freeway.

The cemetery remained unused and fell into neglect. Grass and weeds had grown over much of the area. It wasn’t until 1980, when the city was expanding, that the Comet Lodge Cemetery had begun to come back into the public eye. Whether out of neglect or pure ignorance, parts of the cemetery were demolished to make room for 11 homes.

Headstones were removed and destroyed, though some still littered the area. Graves were exhumed and desecrated. Sewage pipes were laid where bodies once rested. Part of the area was designated as a dog park. The city tore apart a burial site for the sake of development. They claimed they had no knowledge that there was ever a graveyard in the area, despite a 1950s press release from the city government acknowledging the existence of the Comet Lodge. But while Seattle city officials attempted to hide their own history, the memories of those whose ancestors were buried there weren’t easily forgotten.

The People Push Back

Few knew about the burial site, except for some of Seattle’s longstanding residents. In other words, those whose families had been buried there long ago. The continued development of Beacon Hill spurred activism around the Comet Lodge, led by people who wanted to preserve their familial heritage. John Dickinson was one of them.

Dickinson has an ancestor buried in Comet Lodge, an early mayor of the town of South Park, which has now been absorbed into the city of Seattle. He also has the records of over 400 known gravesites at the cemetery. Seattle residents often contacted Dickinson when they wanted to know more about their loved ones who may be buried there, helping to keep a long-forgotten part of city history alive. So it only made sense that John would lead the fight against the city to recognize the Comet Lodge Cemetery.

At first, those who moved in had no idea what lie just a few meters beneath their feet. Dickinson made sure they knew. After all, informed consent is a must; nobody would want to live on a graveyard without prior knowledge. He penned a letter to the mayor in 1997, representing nine homeowners, asking to reimburse part of the value of their home. Over the years, Dickinson clashed with city officials. They denied any knowledge of the cemetery, while his records clearly stated otherwise. He received citations and cease-and-desist letters from the city when he tried to tidy up the more neglected parts of the cemetery, despite having a permit from the city to do just that.

Dickinson worked with the Washington State Cemetery Board to keep further construction from taking place. They rescued headstones whenever they could. He even opened a virtual graveyard, where loved ones can search online for records pertaining to their ancestors.

Eventually, the city caved in, partially. A group of high schoolers led an effort to restore the cemetery in 2002, collecting oral records from residents who had loved ones in Comet Lodge. The city granted about $100,000 towards cleaning up the graveyard. They erected gravestones commemorating the people buried there, though they weren’t in their exact locations. Today, houses sit atop one area of the graveyard, while commemorative headstones mark the existence of the Comet Lodge Cemetery. Only about a dozen gravestones now dot the Comet Lodge, despite being home to over four hundred souls.

The Ghosts of Comet Lodge Cemetery

Hundreds of bodies lie beneath the soil atop Beacon Hill, belonging to both the native Duwamish and white settlers. The neglect and destruction of the Comet Lodge Cemetery has awakened the spirits of those buried there. While their memory is slowly fading from Seattle’s collective conscious, ghosts have begun showing themselves in an effort to stay…alive.

The cemetery had a section for children called Babyland. As disturbing as that sounds, it was a place for the early settlers to honor their children, many of which didn’t make it into adulthood. The ghosts of their offspring have been known to appear late at night. Local residents claim to see young pioneer children prancing through the graveyard, playing with toys, and sometimes playing hide-and-seek. Some passersby have seen children dressed in period clothing peeking through the few headstones that remain.

As for the lucky residents who live atop the Comet Lodge Cemetery? In addition to being lied to by the city government, they also inherited a spooky surprise. Some of the residents claim that their houses are haunted by the spirits of the cemetery. One woman in particular, whose home sits right on Babyland, has reported freakish phenomena in her home, like lights turning on and off on their own, strange voices around her home at night, and dolls being moved from one place to another. She’s even seen the ghost of a little boy roaming her house at night!

Seattle has a long history, one which began way before the settlers first landed on Alki Beach in the 19th century. The Duwamish have called the city home for centuries, and their spirits still live on, even through Seattle’s ever-changing landscape. Pike Place Market is a must-see for tourists visiting Seattle. People come for the fresh salmon, live oysters, and delicious baked goods, as well as the dozens of magic shops, bookstores, and souvenir stands. But before the world-famous fish market was built on First and Pike, a Duwamish village stood here. When the natives were forced to relocate, Kikisoblu, the daughter of Chief Seattle, refused to leave. Her spirit is just as strong and can be wandering the empty stalls of Pike Place at night. Martha Washington Park was once an all-girls school, where students were abused and neglected. But before that, it was a fishing spot and burial ground for the Duwamish. The ghosts of the young students, as well as the native Duwamish, all haunt the park after sundown. Want to see more Seattle area haunts? Check out the top ten most haunted spots in the city right here!