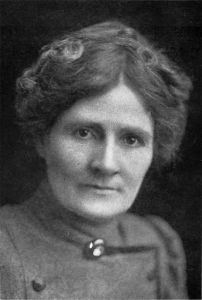 In the early 1900s, women who wanted a quick and easy cure for their ailments went to see Dr. Linda Hazzard. Socialites flocked to Hazzard and her state-of-the-art sanatorium, known as Wilderness Heights, to enjoy weeks of relaxation and a bodily cleanse. Little did they know, Linda Hazzard was actually a fraudster. Not only did none of her cures have any base in reality, but she was also a serial killer. Forced hunger, torture, and death were the norm at Linda Hazzard’s sanitarium. Locals called it Starvation Heights. Not only did Linda kill her victims, but she also stole from them too. The mostly upper-class women were forced to sign over the rights to their assets, which Linda used to line her pockets and expand the Starvation Sanitorium. She effortlessly committed serial murder, officially claiming eighteen lives, and possibly many more. It wasn’t until the death of Claire Williamson that she was arrested for her deeds.

Linda Laura Burfield was born in Carver, Minnesota, where she grew up. When Linda decided to become a doctor, she went off to Minneapolis, leaving behind a husband and two children. She opened her first clinic in 1902, where she began her signature fasting treatment.

According to Linda, any disease could be cured by fasting, from tuberculosis to a simple headache. She claimed the cause of illness was impure blood as a result of impaired digestion. Really, this is where she began her serial murdering spree. Her treatments involved extreme starvation and harsh beatings, which were said to cleanse the body and soul. People began dying under her care. This brought Linda to her first brush with the law.

The coroner ruled one of her patient’s deaths as starvation. There was an attempt to bring her to justice, but she wasn’t a licensed doctor, so she wasn’t held accountable. Her victim’s valuables had also disappeared, but it couldn’t be proven that Linda seized their assets.

Linda met and married Sam Hazzard later that year. He was a former Marine who graduated from West Point, but his alcoholism ruined any chance he had at moving up in the military. The two got married in 1904, but Sam never got around to divorcing his first wife. That landed Sam in prison for two years.

Sam was released in 1906. That’s when the two decided to head west and continue the racket they started in Minnesota. They landed in Puget Sound, purchasing 40 acres in Olalla, Washington. She then had her “medical facility” built, calling it Wilderness Heights. But it didn’t take long for her quiet retreat to take on a much more horrifying name.

Wilderness Heights was sold as a quaint, relaxing hideaway for well-to-do women to cure their ailments. It seemed like a dream come true. Whether for minor pains, tuberculosis, or cancer, one could see Dr. Linda Hazzard in Olalla and be cured within a few weeks to a month. But the reality was much, much different.

Linda wasn’t a doctor. She was able to legally practice in Washington state without a license due to a clause that gave exceptions to practitioners of alternative medicine. And Wilderness Heights wasn’t a cure-all for disease. Linda’s regiment of “fasting” was actually one of starvation and torture. If that wasn’t enough, she robbed and defrauded her victims by forcing them to sign over control of their assets. Sam was in charge of the financials.

Dr. Linds was known for her boisterous personality. She took complete control over her patients. Some of Linda’s “treatments” included multiple daily enemas, “massages” that usually included severe beatings, and starvation-inducing diets. Her patients were usually fed one orange and some strained tomato juice every few days, and maybe some soup if they were lucky. If her victims didn’t outright die, they were left with traumatic injuries. They would lose several pounds over the course of a few weeks, damaging their internal organs. Her zombified patients were spotted fleeing Linda’s property on multiple occasions. Resembling living skeletons, shocked passersby recall them begging for help, but more often for something to eat. Those that did die never “officially” died of starvation. The cause of death listed on the death certificate was usually some disease that Linda claimed was a preexisting condition.

They weren’t allowed to leave either, not without forking over a fortune towards Dr. Linda’s cause. She was planning on using the money to build a massive medical facility, where she could run her medieval death complex in a more efficient, and evil, manner. She thought she got her wish when Sam Hazzard brought home one of the biggest fish Linda could ask for; Claire Williamson.

The Death of Claire Williamson

Claire and Dorothea Williamson were wealthy British socialites traveling through British Colombia when they stumbled upon an ad for Dr. Hazzard’s retreat on Wilderness Heights. They weren’t exactly sick, but felt like they could use a pick-me-up. They both complained of minor aches, swollen glands, and general uneasiness. Both fans of alternative medicine, they were eager to make a visit to Olalla to see the wonderful Dr. Linda Hazzard.

Their vision contrasted sharply with reality. They imagined a beautiful countryside estate complete with wildlife and plenty of land, but the Hazzard’s first had them stay in an apartment in Seattle’s Capitol Hill for two months. They were fed broth every so often and subjected to hour-long enemas. By the time they were moved to Wilderness Heights, the Williamson sisters each weighed about 70 pounds.

The Williamsons never told their family where they were going; their relatives usually disapproved of their antics anyways. That was until Dorothea sent a letter to her childhood nurse in Australia, Margaret Conway. Knowing something was up when she read the nonsensical letter, Margaret set sail for Vancouver, arranging a meeting with Sam Hazzard. Upon her arrival, she was hit with devastating news; Claire was dead.

Margaret was outraged. She wasn’t a doctor, but it was obvious that something was wrong. Dora only weighed 50 pounds, and it hurt her to simply take a seat. Linda has been appointed in charge of Claire’s estate, as well as Dora’s Guardian. But Linda’s strong personality pushed Margaret back. She was unable to gain enough confidence to convince her to let Dora free. Linda extorted Margaret for thousands of dollars in exchange for her freedom. That was after she stole thousands more from the Williamsons in assets.

Linda would have gotten away with her crimes if it wasn’t for the British consul getting involved. They demanded an investigation and found dozens of other wealthy individuals whose deaths were related to Linda’s treatments. Linda and Sam Hazzard were then tried and found guilty of murder, being sentenced to 2 to 20 years in prison.

Getting off with a slap on the wrist, Linda was released from prison after serving only two years in 1915. She even got a pardon from the Washington state governor. She and Sam moved to New Zealand to give the torture chamber treatment another shot. They failed when they were caught and made their way back to Washington in 1920. She opened up yet another sanitorium, still pulling in clients. This time, Linda decided to try the fasting treatment for herself and failed miserably, dying of starvation in 1938.

In all, about 18 people were confirmed to have died under the care of Linda Hazzard, though the true death count is said to be as high as 40. The old sanitorium building still stands today and is a private residence. Over the years, several paranormal phenomena have been witnessed around the home.

One of the former residents once found all of the dining room chairs piled against the bathroom door after she finished cooking. Another resident has seen the spirits of Linda’s victims sitting on the upper ledge of the loft, seemingly too afraid to move. Cries for help have also been heard near the vicinity of the old sanitorium.

Washington state is the perfect place for ghosts to hide out. The gloomy climate, the dense forests, and a long bloody history all help make the place a haven for spooky tales. The Wah Mee Massacre was the bloodiest shooting in state history, when an unpaid gambling debt costs a dozen people their lives. Martha Washington Park was once the site of a Girls School, but the students were subject to all sorts of horrifying experiments. Their ghosts still haunt the park to this day. Re-Bar was one of Seattle’s coolest bars, even hosting an album release party for Nirvana. Today, the ghost of a 70’s leather daddy haunts his old stomping grounds. Want to see more haunts in the PNW? Check out the top ten most haunted places in Washington!