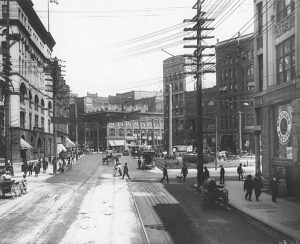 If you want the history of Seattle, look no further than Pioneer Square. The founders set up shop here after spending several months at Alki Point. The settlement at Pioneer Square became the heart of the city, but it later devolved into a poverty-stricken neighborhood run by gangs. Pioneer Square is home to several haunted houses and buildings, like the Merchant’s Cafe, which is haunted by a man with a burnt face. The Seattle Underground also runs through Pioneer Square, and the ghost of Fred the bank teller can be found here, as well as the spectres of gangsters and sex workers. The Owl N’Thistle, the Cadillac Hotel, and the Arctic Club Building are a few of the other haunts that make Pioneer Square the spookiest neighborhood in Seattle.

The Rough Streets of Pioneer Square

Back in the early days, Pioneer Square was the toughest neighborhood in the city. True to the spirit of the Wild West, the gunslingers and corrupt lawmen ran the streets. There were constant brawls, shootouts, and murders as gangsters and corrupt cops fought for control of the city.

Yesler Way was once known as Skid Row, as the steep incline made it easy to slide timber logs down to the mill. But as the quality of life in the neighborhood declined, poverty and crime became a bigger part of life than the lumber mill. Eventually, cities across the country began using the term “Skid Row” to refer to the slums. For example, Los Angeles has a neighborhood called Skid Row, which is known for its high concentration of houseless people.

At the beginning, everything in Seattle was made of wood. The endless forests of Washington meant timber was abundant, so in the eyes of the local government, it was a resourceful option. Buildings, bridges, walkways, even the rudimentary sewage system were all built with local timber. With the constant floods plaguing the city, a fire was the least of anyone’s worries.

In 1889, a carpenter was working in his shop and put a pot of glue to boil. He left the room, forgetting about the glue. It boiled over, causing a raging fire in a room full of sawdust, turpentine, and kerosene. In a few short minutes, the shop was engulfed in flames. But it didn’t stop there. Seattle’s wooden infrastructure was there for the taking. Entire buildings caught fire, collapsing within minutes. Saloons and breweries exploded when fermenting alcohol was heated to high temperatures. Within 24 hours, the city was all but destroyed.

After the city was effectively leveled by the blaze, the local government wasted no time on rebuilding the city. Building with wood was no longer an option, so brick and mortar became the norm. But fire wasn’t their only problem; the city’s elevation meant flooding was rampant. They came up with the brilliant idea to raise the street level by about a dozen feet. Living in Seattle during the regrade was strange indeed. One may have had to climb a ladder to reach a storefront floating ten feet above the ground.

Once construction was complete, the former street-level remained largely forgotten. Businesses used the Seattle Underground as storage, and sometimes as extra shopping space. After it was declared condemned in 1909, the tunnels became a haven for opium dens, gangsters, and sex workers. It remained so until the 1940s and 50s, after which it was abandoned for good.

Today, the Seattle Underground is another tourist trap, but the ghosts of the Underground’s seedy never-ending nights still live on. The ghost of a man named Fred never left his post at the bank, even after being shot dead in a robbery. The spirit of a sex worker has also been spotted in and around the tunnels. Quite a few tourists claim to have captured the images of ghosts while taking selfies in Seattle’s Underground.

The iconic Coleman building was built in 1889, in the wake of the fire. At first, the building hosted nearby businesses that needed space to operate, helping to restore the local community. Several different tenants occupied the building throughout the years, including Wells Fargo, who also lost their Seattle office in the fire.

Today, the Owl N’Thistle is a popular pub in Pioneer Square. Located in the Coleman Building, locals say the building’s history has awakened a few souls that now inhabit the bar. One ghost in particular is known for their skills on the keyboard. Employees of the Owl N’Thistle have also complained of areas with freezing cold air, which is often accompanied by the feeling that someone, or something, is standing directly behind them.

The Merchant’s Cafe was built in 1890 from the ruins of the Great Fire. While it mostly operated as a saloon, it was also a boarding house, brothel, and a bank. The saloon catered to the gold prospectors and loggers who passed through Seattle on their way north. The brothel was run under the guise of hiring women as seamstresses. Portraits of the women were hung around the bar, and the clients would choose which “seamstress” they wanted by choosing from the portraits.

The ghosts of the women who worked the upper floors still live on. Sometimes the portraits are said to move on their own, almost as if they were animated. There are also several other ghosts, who are presumed to be the spirits of those who died in a fire in 1938. A man with charred clothes and a burnt face has been spotted in different parts of the building, and the ghosts of two children haunt the basement. Employees have also reported strange phenomena like flickering lights, disembodies voices, and the feeling of being watched.

The Elliot House opened for business in Pioneer Square in 1890, just after the Great Fire. It was one of the first hotels in the city to open after the blaze. After cycling through several owners, and names, it finally became the Cadillac Hotel in 1906. The hotel catered to blue-collar workers, namely loggers, gold miners, sailors, and railroad workers. During the Great Depression, poverty and violence plagued the building, as with many other businesses in Pioneer Square.

Today, the Cadillac Hotel is still open for business, but there are also a few permanent residents in the building. One story in particular centers on a mother and her child. The woman was a sex worker who had fallen onto hard times and was living in the Cadillac Hotel. She had gotten pregnant and attempted to perform an abortion herself. The procedure went horribly wrong, and the woman bled to death. Guests of the Cadillac Hotel sometimes hear the woman and her child crying late at night.

Even though the Arctic Building is technically in Downtown, it sits right on the border of Pioneer Square. The building was built in 1916 as a headquarters for the Arctic Club, a fraternity of explorers who took excursions to Alaska and Northern Canada. It later was home to the offices of Congressman Marion Zioncheck. As progressive as he was, Zioncheck was also known for his wild antics. While in office, he drove his car on the White House lawn, got into a fight on the House floor, and escaped from a mental facility. Eventually, Zioncheck’s mental health deteriorated. He committed suicide in 1936, jumping from the window of his fifth-floor office in the Arctic Building.

Today, the Arctic Club Building is just another hotel in Seattle. But wait! It’s not just any hotel, it’s very much haunted. Congressman Zioncheck’s spirit still roams the building. The elevator is known to make random stops on the fifth floor, enticing guests to take a walk. Zioncheck’s ghost has been spotted as a transparent silhouette hanging near his old office. Some people have also reported icy cold drafts in some areas of the hotel, which is said to come from the spirits of the Alaskan pioneers.

Seattle isn’t known for its ghosts, but it should be! The city is full of creepy characters waiting to be discovered, and some are hiding right under your nose! Pike Place is Seattle’s biggest tourist trap, but it’s also home to the ghost of Kikisoblu, the daughter of Chief Seattle. She refused to leave when the Duwamish were forced off their ancestral homeland, and her spirit still resides here in the afterlife. The Comet Lodge Cemetery is a nearly forgotten graveyard in Beacon Hill. The city tried to clear the land for development in the 80s, but concerned citizens pushed back. They only partially saved the Comet Lodge, but the spirits of those buried there have awakened for revenge. University Heights Center is a beautiful community center near UW, but it’s also him to the ghost of a boy named Brian. After dying in a locked closet on account of an abusive teacher, his spirit eternally haunts the halls of University Heights. Want to see more haunts around Seattle? Check out the top ten most haunted spots in the city right here!