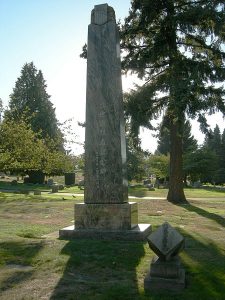 Seattle’s got quite a few graveyards, but none as iconic as Lakeview Cemetery in Capitol Hill. It’s home to several influential people, including Seattle’s founding fathers and Hollywood martial arts legends Bruce and Brandon Lee. This makes it one of the most visited cemeteries in the world, with tens of thousands of visitors every year. It also hosts the only Confederate Memorial in the Pacific Northwest, making the graveyard a source of controversy as well. Lakeview Cemetery is said to be haunted, with many visitors reporting highly unusual paranormal phenomena. The ghost of Princess Angeline, daughter of Chief Seattle, has been spotted near her grave at Lakeview.

The Seattle Masonic Cemetery was founded in 1872 as a private graveyard primarily serving the city’s wealthy and prominent citizens and the elite class. This prompted locals to nickname the graveyard “Seattle’s Pioneer Cemetery.” In 1890, the name was changed to Lakeview Cemetery because of the view of Lake Washington. An affluent neighborhood grew around the cemetery as the city expanded. Today, at least 40,000 people are said to be buried at the graveyard, including a slew of Seattle’s most influential people. The legend himself, Bruce Lee, is also buried at Lakeview, along with his son Brandon Lee.

Bruce and Brandon Lee arguably are the most famous people buried at Lakeview Cemetery. Their graves attract several thousand visitors every year. They’re by far the most famous gravesites in Seattle, and according to TIME magazine, among the top ten most famous gravesites in the world. On Bruce Lee’s birthday in 2013, the flowers were piled higher than the headstones. Their graves are so popular, the owners of Lakeview Cemetery didn’t allow Kurt Cobain to be buried there, as the traffic in the graveyard would have been overwhelming.

Bruce Lee died on July 20th, 1973, after being diagnosed with a cerebral edema just a few months earlier. While visiting Hong Kong to discuss movie roles, Lee complained of a headache and was given a painkiller mixed with a tranquilizer for the pain. After laying down to take a nap, he never woke up. Doctors attributed a reaction from the medication mixed with his cerebral edema as the cause of death. His body was later flown to his wife’s hometown of Seattle for burial, where he was laid to rest at Lakeview Cemetery.

Brandon Lee died in 1993 while filming a scene for an action film called The Crow. In a scene where Brandon’s character is killed by a group of criminals, a malfunction in the gun, which was real, caused a bullet that had been previously lodged in the gun to be ejected by the firing of a blank round. Brandon was struck in the torso and was admitted to the hospital for surgery. The doctors couldn’t save him, and he was pronounced dead on March 31st, 1993. He was buried next to his father in Lakeview Cemetery.

Lakeview Cemetery is home to several well-known people, including celebrities, business magnates, and some of Seattle’s earliest pioneers. Among Lakeview’s most well-known grave sites are listed below:

-Princess Angeline: Also known as Kikisoblu, Princess Angeline was the daughter of Chief Sealth, better known as Chief Seattle, leader of the Duwamish Tribe, and namesake of the city of Seattle. When the Duwamish were forced from their native land, she refused, remaining in her home on the banks of Elliot Bay, near the present-day site of Pike Place Market.

-Several members of the Denny Party: Carson Boren, Arthur A. Denny, Thomas Mercer, and several members of Seattle’s “founding fathers” are buried at Lakeview. After a failed first attempt at Alki Point, they moved to the banks of Elliot Bay and established a permanent settlement. Most of the men have major roads named after them.

-Gottlieb Burien: Prussian immigrant and early Puget Sound pioneer who was the namesake for the city of Burien, Washington.

Lakeview Cemetery has two major memorials on its grounds. The Nisei Memorial, built to honor Japanese Americans who fought in World War II and the Confederate Monument.

The Nisei War Memorial Monument was erected in 1949 to honor the 47 people of Japanese ancestry from Seattle who died fighting in the Second World War. The Nisei Veterans Committee raised over $10,000 in 1947 to have the memorial built. Later on, several other Japanese American soldiers who died in Vietnam, Korea, and Granada were also added to the memorial. The word Nisei refers to a second-generation Japanese immigrant.

The United Confederate Veterans Memorial was built in 1926 by the Seattle chapter of the United Daughters of the Confederacy. It’s the only Civil War monument for Confederate soldiers in the Pacific Northwest, and it hasn’t gone unnoticed. The memorial has been vandalized several times over the years, most notably during the George Floyd protests in 2020, when public pressure brought into question the nature of Confederate monuments across the country, though it had been vandalized several times before the protests. The memorial is carved from granite sourced from Stone Mountain, Georgia, the birthplace of the Ku Klux Klan.

The Ghosts of Lakeview Cemetery

Lakeview Cemetery is the resting place of over 40,000 people, and not all of them have remained at rest. Several souls have been seen roaming the cemetery grounds, and many visitors have experienced strange paranormal phenomena while taking a stroll through Lakeview, especially at night. Commonly reported occurrences include shadow people, disembodied voices, hazy white apparitions, and blasts of cold air. Many also report the strange feeling of being watched.

The ghost of Kikisoblu, the daughter of Chief Sealth, has been spotted roaming Lakeview Cemetery. Also known as Prince Angeline, her small and frail outline has been spotted going for short walks near her grave. Although she often appears to be a normal visitor, she’s been recognized by the more savvy visitors to Lakeview, and many have caught her apparition seemingly disappearing or vanishing into thin air. She tends to randomly appear right on top of her grave, and some have seen her slowly descend back into her grave when she’s done with her walk. Prince Angeline’s ghost can also be seen at Pike Place Market at night.

Some have even claimed to see the ghosts of Bruce and Brandon Lee hanging out near their graves. Those who visit Lakeview Cemetery claim to have seen two men meditating, stretching, and engaging in friendly sparring sessions near their graves. They usually disappear shortly afterward, leaving behind no trace of their existence.

Behind the great seafood, fresh coffee, and thriving music scene, Seattle can be a scary place! Believe it or not, but the streets of Seattle carry a dark secret, one that can only be told from beyond the grave. The city’s many cemeteries and graveyards are sure to give you a good spook if you’re willing to pay them a visit. The Grand Army of the Republic Cemetery, or the GAR for short, is dedicated to the Union soldiers who fought for the US during the Civil War. The ghosts of the soldiers can still be seen roaming the graveyard. They often appear to have walked straight off the battlefield, complete with their own flesh wounds. Some might have their torsos ripped open, be missing an arm or leg, or might even have a giant hole in their head! The Comet Lodge Cemetery is a nearly forgotten graveyard in Beacon Hill. Made for the families of Seattle’s early pioneers, it later became the community cemetery for the residents of Beacon Hill and Georgetown. As the city expanded, city leaders tossed aside all respect for the dead, digging up parts of the graveyard for development without notifying any of the ancestors of the deceased. Today, only a handful of gravestones remain out of the original 500, and houses stand on parts of their burial plots. Needless to say, their ghosts are angry, as many of the homes nearby have reported some sort of supernatural phenomenon. The Black Diamond Cemetery is a ways away from Seattle, but the haunts include strange lights, shadows of old miners, and a phantom horse appearing at night. Want to see more Seattle area haunts? Check out the top ten most haunted spots in the city right here!