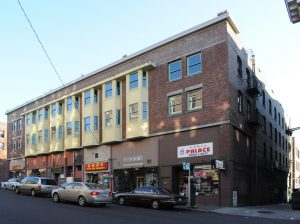 The Louisa Hotel in Chinatown was once the heart of Seattle’s jazz scene. It was also the site of one of the bloodiest mass murders the city’s ever seen. The Wah Mee Massacre was the result of a gang war stemming from unpaid gambling debts between two rival street gangs. Thirteen people were shot in the head at point-blank range while tied at the hands and knees. The assailants then robbed them of their valuables. The killers would have gotten away with it too, if it weren’t for the heroic efforts of one lonely survivor; a Navy veteran and poker dealer by the name of Wai Chin. Today, the jazzy roots of the Louisa Hotel are still being discovered, though many say the ghosts of the victims still haunt the building. And just in case you’re looking for a place, the Louisa Hotel is searching for tenants.

The Louisa Hotel and the Growth of Chinatown

The Louisa Hotel was built in 1909, just as Asian immigration to Seattle was ramping up. The community was still reeling after the first wave of immigration was slowed by the Chinese Exclusion Act. The Seattle Riot of 1886 also drove out much of the city’s Asian community.

At the time, the building was named the Nelson, Taghom, and Jensen Building, after the Scandinavian investors who commissioned it. The name was later changed to the Hudson Hotel. The building housed Asian immigrants who came to work in the booming Alaskan cannery industry. Around the 1920s and 30s, prices in Downtown began to increase due to the Jackson Regrade, and the Chinese were forced to move to other areas of the city. That’s when today’s Chinatown District began to form around King Street, near the Louisa Hotel.

At the same time, Seattle’s music scene was taking off. The first jazz band played in Seattle in 1918 at Washington Hall. A Black social club on Jackson Street had opened a year earlier, and the arrival of jazz caused the neighborhood to explode with a vibrant musical scene. Seattle didn’t have a large Black population, and most lived around Jackson Street. In the ensuing years, the area became a hotbed of nightlife, with jazz clubs, bars, and brothels. It was a place where people of all races came together under the banner of music and alcohol.

Speaking of alcohol, Prohibition took effect in Washington state in 1916. Yet, Seattle city officials were relatively lenient. They allowed speakeasies and bars in exchange for payment and bribes. This culture of corruption allowed music venues to thrive.

The Louisa Hotel hosted two such venues. The Club Royal was located on the eastern half of the building’s basement. It later became known as the Chinese Garden Club, or better, the “Bucket of Blood,” for the massive red cups of alcohol they served. They were wildly popular, attracting Seattlites of all classes. Lucille Jeter, the mother of none other than Jimi Hendrix, got a job as a server there after lying about her age.

As racial ties became stronger in the area, the upper-class whites north of Yesler Way began to disapprove of the relatively harmonious environment. In 1931, a wave of police raids swept the area under the guise of enforcing Prohibition, and the Bucket of Blood was one of the targets. The Bucket of Blood was notable for its many murals painted by its patrons, which hadn’t been rediscovered until 2018.

A nightclub called Blue Heaven occupied the western half of the Louisa Hotel’s basement. Known for its high-stakes gambling, the name was eventually changed to the Wah Mee Club.

Even when hosting two popular nightclubs, the Louisa Hotel never stopped housing travelers and immigrants within its walls. Traveling musicians, beatniks, hippies, flappers, and street performers of all races and backgrounds frequented the building. In the 1950s, another group joined them.

The Post-War boom brought the US Navy to town as shipbuilding took off in the city’s harbor. Like those who stayed in the Louisa Hotel before them, the sailors left their mark on the building, leaving murals and notes drawn on the walls of their rooms.

In the 1970s, the Wah Mee Club had become pretty seedy. It operated illegal gambling operations run by local sects of the Triads. The police had raided them in 1972 for violating the city’s blue laws, which required clubs to close by midnight.

By the 1980s, the club was known as a sketchy dive bar. Only those who knew the scene were allowed in. The club had a double-door security entrance system to keep out unknowns. The entrance had several rows of opaque glass blocks, with one transparent block to allow security to see outside. For Willie Mak, a rival gang member who needed fast cash to pay his gambling debts, getting past security was no issue.

On February 18th, 1983, Willie Mak, joined by Tony and Benjamin Ng, made their way toward the Louisa Hotel at midnight. They were armed to the teeth. Willie was a regular at the Wah Mee, and so he and Tony got past the checkpoint while Benjamin waited outside. Once he gained entry, the two drew their guns and ordered everyone on the ground. Ten people were in the club at the time, both patrons and staff. Benjamin entered ten minutes later. Then they got to hogtying the victims while stripping them of their cash. Four more showed up to the Wah Mee while the robbery was in progress. It was their lucky day. The gunmen opened the security door, and they too were bound and robbed. Fourteen were now in the hands of the Wah Mee robbers.

Willie Mak was bloodthirsty. He didn’t just want the money; he was there to take lives. The Bing Kung Tong ran the Wah Mee. Willie was with the Hop Sing. They were rival gangs, and rumors had it that they were at war. Thirty-six shots were fired in the span of a few short minutes. All fourteen victims were shot in the head execution style. One man survived. A former Navy veteran by the name of Wai Chin.

Wai Chin was a dealer at the Wah Mee and had just started his shift when the robbery began. As he was being hogtied, he convinced Tony not to tied the rope so tight, as he was an old man and posed no threat. He was shot twice in the neck and jaw shortly after, falling unconscious. He was awakened after the gunmen left when three gamblers who were trying to enter the club had begun banging on the front doors. He was able to crawl out of the ropes and staggered outside, where he met the three other patrons. The police were called, and the manhunt began.

Thanks to Wai Chin, the three gunmen were caught and arrested. Benjamin and Willie were arrested quickly, with Willie admitting to the murders. Tony was chased down all the way to Alberta, where the Canadian Mounties arrested him. Willie was sentenced to death and Benjamin to life without parole. Tony was also sentenced to life but was released on parole in 2010, then deported to Hong Kong.

Legacy of the Wah Mee Massacre

The mass murder at the Louisa Hotel was the worst shooting in Washington state history. The Louisa Hotel has since been renovated, but the section where the Wah Mee stood was demolished after catching fire in 2013. It remained boarded up for a few years, as the locals believed it would calm the spirits that reside within the building.

Tourists often visited the building, trying to catch a glimpse of the ghosts said to reside within. While nobody was ever allowed inside, one could peer in and see that everything remained untouched since the early 80s. Many say that upon visiting the old Wah Mee club, strange shadows and disembodied voices were commonplace. Some have even heard the victim’s ghosts moaning in pain in the dead of night.

Today, the Louisa Hotel is home to several locally-owned Asian shops and businesses, and the rooms that once housed travelers now serve as residential units.

Seattle’s got a lot of history. And with history comes ghosts! The history of Puget Sound is alive, or not so alive, with a plethora of horror stories. Check out the Gessner Mansion! This massive Victorian-era home in Georgetown was once a quaint family home before becoming a brothel and a gambling den. A woman died in the building’s spire, and her spirit is still said to reside there, eternally looking through the window. The Old Tacoma City Hall was once the seat of the city’s government until it fell into disrepair in the 1950s. There are plans to renovate it, but the spirit of a prankster named Gus threatens to throw a wrench in their plans. The Arctic Club was built by Alaskan explorers who wanted a place to drink and discuss their excursions. Today, it’s haunted by the ghost of Marion Zioncheck, a progressive politician who jumped from the window of his office on the 5th floor. Want to see more haunted Seattle? Check out the top ten most haunted spots in the city right here!