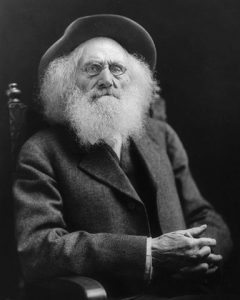 Ezra Meeker was an American pioneer who helped drum up support for western expansion. He found success on the other side of the Oregon Trail, where he became the “Hop King of the World” and supplied local breweries with his crop. He and his wife Eliza built the Meeker Mansion after founding the town of Puyallup. Over 100 years later, the couple still hasn’t left their prized home, and their ghosts are adamant about continuing their lives even after death. Ezra’s relentless snoring is a major nuisance to overnight guests, and Eliza’s perfume can be smelled all around the house. The two also like to make their appearance known whenever social functions are hosted in the mansion. Even though the Meeker Mansion is now a museum, the Meeker family isn’t leaving anytime soon.

Ezra Meeker and the Oregon Trail

Ezra Meeker was born in Ohio in 1830 and grew up mainly in Indiana. Born to a family of farmers, he learned at a young age that he enjoyed working outside. He didn’t do well in school either. At 21 years old, he married Eliza, his high school sweetheart. A few years later, the two ended up in Iowa, having been promised free land upon which to build a farm.

Iowa wasn’t what they expected. The land wasn’t free, and the winters were way too cold. They heard about free land in the Pacific Northwest, not to mention the climate was a lot less harsh than the extremes of the Great Plains. In 1852, just after the birth of their son, the two decided that embarking on a journey via the Oregon Trail would be a worthwhile endeavor.

It was a rough trip. The 2,000 mile hike took the Meeker Party six whole months to complete. Unlike other families that crossed the trail, everyone survived. Although, Oliver, Ezra’s brother, became ill, though he recovered after four days. They traveled with several oxen and cows and had ample food supplies. They hunted wild bison when necessary. The Meekers weren’t alone. Over 400,000 other people crossed the Oregon Trail, and they were always in sight of thousands of other parties.

They took it slow, as they didn’t want to damage their wagon. They constantly passed abandoned carriages and stranded families, and the last thing they wanted was to suffer a similar fate. Occasionally, Indigenous tribes stopped them and demanded provisions in exchange for a safe passage. Luckily, they managed to escape without incident.

Upon arriving in Oregon, the Meeker family settled in Portland, then moved to Mt. Saint Helens. Ezra worked various jobs, then eventually made his first land claim near present-day Kalama, Washington, where he built a log cabin. After hearing that the northern half of the Oregon Territory would become reorganized into the Washington Territory, he decided to move to Puget Sound.

Puyallup and the Hop King of the World

Ezra made several land claims around the region. After being introduced to hops by a friend, he decided to try his hand at growing them. He made a killing, as the crop had yet to be established in the region. Hop farming later boomed in the Puget Sound, but Meeker had a head start and was already supplying major brewers when the boom kicked in. It didn’t take long for Meeker to become known as the “Hop King of the World.”

Meeker hit it big. He wrote an 80-page paper to promote investments in the region. He traveled across the country, trying to convince railroad tycoons to lay out tracks toward the Pacific Northwest. Upon arriving home, he bought huge tracts of land around his cabin and founded the town of Puyallup. Ezra was voted the first mayor in 1890.

Ezra went on to become a prospector in the Klondike Gold Rush, though he was mostly unsuccessful. He then continued to advocate for American migration to the West, rubbing shoulders with a few presidents along the way. He traveled the Oregon Trail several more times in the process. Upon his death in 1928, Meeker had become an American icon and one of the most well-known pioneers of the West.

The Meekers built their mansion in 1890. Up until that point, most of their time had been spent living in log cabins. Having gotten fed up with raising their children in such cramped housing, Eliza requested that they build a proper home. Using the wealth they had amassed from hop farming, they built the Meeker Mansion at a cost of $26,000.

The mansion was built in the Italianate style. The Meekers even had an Italian artist living in the house with them for a year, and had him paint the ceiling in a style that matched the architecture.

The Meeker Mansion was used as a retirement and nursing home for the Grand Army of the Republic from 1914 to 1969. By the 1960s, the house had begun falling into disrepair and was planned for demolition via controlled burning. It was saved by the Puyallup Historical Society, which poured money into the mansion for restoration. Today, the Meeker Mansion is a museum administered by the Society. The house can also be rented out for overnight stays.

The Ghosts of Ezra and Eliza

Ezra and Eliza Meeker may be long gone, but their spirits are still alive and well in their old place of residence. After all, they only founded the city of Puyallup and helped put Puget Sound on the map; they aren’t going to leave that easily. Guests and staff at the museum have reported multiple paranormal phenomena, though they say the Meekers are rather friendly.

Many catch a glimpse of the Meekers in their old bedroom. They’re sometimes seen sleeping, though Eliza is often seen looking through her bedroom window. Those who’ve spent the night claim to have heard Ezra’s ghost snoring, especially if they decide to sleep in the bedroom. Sometimes he appears lying in bed right next to the guests, seemingly lacking any boundaries pertaining to personal space.

Guests also catch glimpses of the Meeker’s daily routines. Ezra can sometimes be seen in the yard sawing logs. Eliza has been spotted putting on perfume in the restroom, and many even say that they can smell the fragrance around the house. The couple sometimes makes an appearance during social events, vanishing into thin air once they’ve attracted too much attention.

Ezra Meeker helped establish the Pacific Northwest as a destination for American migrants. Today, Puyallup is a sleepy town in the suburbs of Seattle. But the Meekers aren’t the only ghosts from Seattle’s history that haunt the forests and waterways of  Puget Sound. Pike Place Market was once home to Kikisoblu, the daughter of Chief Seattle, and was known to the locals as Princess Angeline. She refused the forced removal of the Duwamish from Seattle and opted to remain in her home. She still hasn’t left, and her ghost can be seen hanging around Pike Place at night. The Rucker family established the town of Everett after seeing the potential for a lucrative timber industry. They built the Rucker Mansion with the wealth they acquired. But more money, more problems. Jane Rucker committed suicide a few years after moving into the home, and her ghost can be heard playing the ballroom piano at night. The Thornewood Mansion just outside of Tacoma is a bonafide castle. The property is decorated with fountains, ornate landscaping, and pieces of genuine estates imported from England. It was built by Chester Thorne in 1908. Thorne helped turn the city of Tacoma into a thriving seaport during the turn of the century. The ghosts of several members of the Thorne family still live in the mansion, and a few guests have stumbled into their phantom parties. Want to see more haunts around the Evergreen State? Check out the top ten most haunted spots in Washington right here!