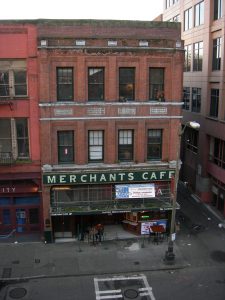 The Merchants Cafe is smack dab in Pioneer Square, a historic neighborhood in Seattle. It’s the oldest bar in the city, and possibly one of the oldest in the country. The Merchants Cafe was once a saloon, boarding house, and a brothel for gold miners and lumberjacks passing through Seattle on their way north. Today, their spirits still live on in the cafe. The ghost of a sex worker resides in the bar. Her portrait is still on the wall, and sometimes it moves on its own as if animated by her spirit. Her ghost also haunts the basement restrooms and likes to play pranks on the patrons. The ghost of a man with a burnt face also haunts the bar, rumored to be a casualty from a fire in the 1930s.

Pioneer Square was once the heart of Seattle, being where some of the early founders of the city settled in 1852. It was where Henry Yesler decided to set up his lumber mill. Yesler Way at the time was known as Skid Row. The phrase didn’t have the same meaning as it did today. Back then, the steeply sloped road was used to slide timber logs down to the lumber mill. They would skid down the street, giving the road its name. As Pioneer Square became riddled with poverty, the name Skid Row came to be applied to impoverished areas in cities all across America.

John Hall Sanderson was an early Seattle businessman and landowner who built a two-story wooden building in Pioneer Square. It held a general store on the first floor and a photography studio on the second. Unfortunately for Sanderson, and everyone else in Pioneer Square, relying on the plentiful wood from the surrounding forests proved to be a fatal mistake.

The Great Seattle Fire ripped through the city in 1889, leveling just about every structure in Seattle. Being that everything was made of wood, hardly anything was left untouched. The early denizens of the city had used timber to build their homes, businesses, and even essential infrastructure like the sewage pipes, which were made of hollowed-out logs. The wet climate necessitated walkways over many parts of the city, and being that those were made of wood, they burned as well.

Sanderson didn’t quit. He rebuilt on the same spot where he had his last store. Like many Seattlites, he learned a hard lesson from the fire and had the new building constructed with brick and terracotta. He built his new building to hold a liquor store and cafe on the first floor and a hotel or boarding house on the second and third floors. The building was finished in 1890, and Sanderson sold it in 1892. The new establishment was named the Merchants Exchange Saloon.

The saloon opened for business in 1892, serving liquor on the first floor and hosting guests on the upper floors. The saloon catered to gold miners and lumberjacks who were on their way up to Alaska and the Yukon. They came and bought drinks for a measly 5 cents while passing through town, and rented the upstairs rooms at an hourly rate if they needed to rest. The saloon was called the Merchants Exchange for a reason; it functioned as a bank for the traveling workers, and they even took gold as payment for drinks.

After a while, the Merchants Exchange also began functioning as a brothel. The owners saw a lucrative business opportunity in the lonely lumberjacks and miners who frequented the bar. Simply put, there were too many men and not enough women. They brought in sex workers under the guise of hiring “seamstresses” to work in the bar. They worked out of the upper floors of the building. Portraits of the women were painted and hung up on the wall. This acted as a catalog for the clients, who would point to the woman they wanted. They would then be directed upstairs to her room.

The Merchants Cafe Today: The Oldest Bar in Seattle

The Merchants Exchange Saloon is now the Merchants Cafe. Gone are the days of rowdy gold prospectors and upstairs bordellos, and in come the hot wings, salmon burgers, and craft beers. While the glory days of the saloon have passed by, the Merchants Cafe is still a Seattle favorite. Although, the portraits of the saloon’s painted ladies are still hanging on the walls.

Having been established in 1890, the Merchants Cafe is verifiably the oldest operating bar in Seattle. Hell, it might be one of the oldest bars in the country. Being part of Seattle history is the bar’s claim to fame, but quite a few locals swing by for the ghosts.

Ghosts of the Merchants Cafe

The Merchants Cafe is over a hundred years old and played a role in Pacific Northwest history when it hosted the lumberjacks and gold miners who passed through Seattle on their way to the Klondike. Their memories are still alive in the Merchants Cafe, even though they’ve been dead for over a century. Several ghosts and spirits are known to inhabit the building, and some simply seem to go about their business, while others are quite frightening. Guests and employees have seen all manners of paranormal phenomena, from hazy apparitions to disembodied voices.

Back during the old saloon days, the story goes that one of the sex workers was mysteriously found dead in her upstairs room. Nobody knows how exactly she died, whether it was murder, suicide, or some other cause. Her picture was never taken down and still hangs in the bar along with portraits of the other women. Her painting is said to be haunted and is known as the “Oriental Dancing Girl.” Many have claimed to see the woman in the portrait move as if she was animated. Others have seen her wink or follow them with her eyes.

But it’s not just the painting; the ghost of the woman portrayed in the portrait is said to still haunt the Merchant Cafe. She’s most often encountered in the basement restrooms, where she might slam the doors and stalls, turn the tap water on, and turn off the lights when the restroom is occupied. Some men have also heard a female voice whispering in their ears upon entering the men’s room.

The Merchant Cafe was built in the wake of the Great Seattle Fire and was made with brick in case another blaze broke out. Ironically, the building once again did catch fire in 1938. But this time, the building survived, but several people perished. Two children, a boy and girl, were among those who died. Their spirits haunt the basement, and they often appear at random, asking guests to play before disappearing into thin air.

There was an older man who also died in the fire. He can be identified by his charred suit. One bartender had a close-and-personal interaction with the charred man. The bartender went to the restroom to investigate a strange noise, where he came in contact with the old man. Believing he was houseless due to his tattered clothing, the man then motioned for the bartender to come closer. He turned around to reveal a burnt and melted face, then left to another area of the bar.

But it wasn’t over. The bartender followed the old man down the stairs, confronting him in the basement bar. That’s when things got freaky. The lights began oscillating on and off, and a loud voice chanted:

“Two stones will skip a sink. The third will float but remain adrift. The fourth will circle the waters. And the last will reach the shore, not to come back again.”

The lights then went out, before becoming extremely bright, then going back to normal. Just like that, the old man was gone. The bartender was left confused, and has yet to decipher the cryptic message.

Seattle has seen it all. Gold miners, lumberjacks, rumrunners, and opium dens. The rambunctious past of places like Pioneer Square and the Chinatown district give Seattle its charm. It’s also the reason why the Emerald City is so packed with ghosts and spectres. The Seattle Underground was created when engineers decided to raise the city streets by 12 whole feet, leaving a network of underground tunnels. They became a literal underworld full of drugs, sex, and gangsters. Today, tourists go on day tours of the Seattle Underground, but the ghosts of the old inhabitants are alive and well. The Lousia Hotel was once home to Seattle’s thriving jazz nightclub scene. By the 1980s, it hosted several seedy gambling parlors until thirteen people were killed in the Wah Mee Massacre. The Hotel Ändra in Belltown was once known as the Claremont Hotel. Back in the days of the Great Depression, it was known for jazz parties, rumrunners, and the occasional shootout. The ninth floor is known to host ghostly jazz parties, but nobody can ever identify where the sound is coming from. Want to see more Seattle haunts? Check out the top ten most haunted spots in the city right here!