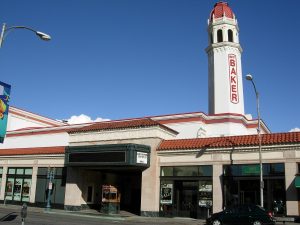 Halfway between Seattle and Vancouver lies the town of Bellingham. Renowned for its endless forests, the city is home to the haunted Mount Baker Theatre. Where the theatre hosts numerous plays, performances, and concerts by local community-based artists, a few ghosts also call the Mount Baker Theatre home. The spirit of a woman named Judy is the most encountered spectre, and she’s quite the flirtatious one. She’s known to chase after male employees, trying to seduce them with her posh 20th-century charm. Patrons of the Mount Baker Theatre have also seen floating orbs around the building on several occasions, mostly over the main stage during performances. The ghost of a feral cat is also said to haunt the basement.

During the Great Depression, jobs, money, and even a good meal were hard to come by. Crime was on the rise as bootleggers, outlaws, and bank robbers took the country by storm. Americans needed an escape, and the budding movie industry provided the perfect outlet for those who wanted to bury themselves in a fictional world.

Technology allowed for more extravagant films, and synchronized sound became an industry standard. Silent film restricted movies to those who were literate, so the audiovisual entertainment experience had attracted mass appeal, bringing the joy of film to the uneducated. And as film companies became vertically integrated, the price of a ticket dropped significantly. The nation fell deeper into an economic slump, but movies became more popular than ever.

Technological progression and larger budgets allowed film companies to leave the studio and shoot in real locations. The natural beauty of Washington State brought film companies who needed a picturesque setting. The mountains of Bellingham, and nearby Mount Baker, were used in place of the Alaskan tundra in 1937s The Barrier. The film industry brought much-needed tourism to the region, helping prop up the state during the worst parts of the Depression.

In the early 20th century, Bellingham was a fast-growing town. The coal, lumber, and salmon canning industries were bringing economic growth. After the San Francisco Earthquake of 1906, large areas of forest were clearcut to provide lumber to rebuild the city, creating jobs. Bellingham was an immigrant destination as Indians and Asians flocked to the city. Racial tensions became tense, until they finally boiled over during the Bellingham Riots of 1907, driving hundreds of immigrants out of town.

Bellingham’s rapid growth necessitated the need for an entertainment venue. The Mount Baker Theatre was built in 1927. Architect Robert Reamer was called upon to design the theatre and chose the Spanish-Moorish architectural style. Reamer also designed the 5th Avenue Theatre in Seattle, but his most well-known work is the Old Faithful Inn in Yellowstone National Park.

The Mount Baker Theatre was built at the tail end of the vaudeville and silent movie era. The Jazz Singer, one of the first “talkies” to be widely distributed, was released during the theatre’s opening year and ushered in the era of motion pictures. As the movie industry exploded during the Great Depression, five other theatres were built in Bellingham.

After World War II, the move towards television left many theatres high and dry. Most of the theatres around Bellingham closed down for good. The Mount Baker Theatre survived by converting its space to also host operas, orchestras, and live performances.

In 1978, the theatre was placed on the National Register of Historic Places. Yet, the theatre was acquired by a Canadian company that planned to break the theatre into several smaller venues. The building was in dire need of repairs at the time, and there were even talks of tearing it down. Recognizing the cultural and historical value of the Mount Baker Theatre, the community rallied around the cause, forming a non-profit and forming a partnership with the city, which then took up ownership. The city and citizens of Bellingham worked to raise money to improve the condition of the theatre. The Mount Baker Theatre has gone through several renovations since 1991, which has included upgrades to the auditorium, lighting and sound systems, dressing rooms and backstage, and the addition of two extra performance venues.

The theatre was built in Bellingham’s historic district and is in the vicinity of several other local attractions. The Bellingham Carnegie Library and the Bellingham Tower both sit within a block of the Mount Baker Theatre. The original city hall and Whatcom Museum are nearby as well.

The Mount Baker Theatre is the largest performance venue in the state north of Seattle. The theatre mostly hosts artists and performers from Northern Washington. There are three separate theatre rooms from which to host concerts and performances. The main theatre room can seat up to 1,517 people and can be used to show movies, live concerts, plays, and orchestras.

The Encore Room is a smaller venue, often used as a reception hall. It can seat 120 people at 60 to 80 tables and has a kitchen attached. The Walton Theatre is a second performance venue for smaller showings. It also has its own kitchen and can accommodate 200 people.

The Ghosts of Mount Baker Theatre

It’s said that just about every theatre in America is haunted, and Mount Baker is no exception. The theatre will celebrate its centennial in 2027, and any building that old has just got to be haunted! Right?

The story goes that a woman named Judy lived on the land that is today occupied by the Mount Baker Theatre. She was known to be quite a flirt and had the hearts of several young men in the neighborhood. Unfortunately for Judy, the city razed her home to build the Mount Baker Theatre, and she never really got over it. Her ghost is said to haunt the theatre to this day. Even the renovations didn’t shake her from her old home.

Judy is most often seen on the balcony, though she’s appeared all over the theatre. She especially likes to chase after the male employees, flirting and attempting to seduce them. Ushers, servers, projectionists; they’ve all claimed to have been seduced by Judy the ghost.

Other ghosts are known to haunt the Mount Baker Theatre. The spirit of a feral cat in the basement has been seen hunting mice and disappears into thin air when approached by human observers. A man in a pin-striped tuxedo named Geoffrey has also been spotted around the theatre.

Floating orbs have been reported in the main theatre room on multiple occasions. The orbs tend to appear over the main stage, oftentimes during performances. A few witnesses say the orbs dance along with the music and carry on through the entirety of the performance. They’ve also appeared in other parts of the theatre, and during times when the theatre has been mostly empty.

The staff at the Mount Baker Theatre keep a ghostlight on stage during the theatre’s downtime. Theatre ghostlights are made to give the ghosts of aspiring performers a place to dance and rehearse. The lights also ward off evil spirits.

The natural beauty of Washington State attracts tourists who come to enjoy the great outdoors. But they also hide a terrifying secret; the forests are home to loads of ghosts! The Wilderness Heights Sanitorium once stood deep in the woods of Olalla, Washington. Run by a quack doctor names Linda Hazzard, it quickly became known as Starvation Heights. Linda fooled dozens of patients with claims that her fasting regimen could cure any disease. Her “cure” actually consisted of extreme starvation and torture. Few made it out of her estate alive. The ghosts of her victims still haunt the home today. The Tokeland Hotel is a nice place to stay for those who want to catch clams on the Washington coast. But the halls of the hotel are haunted by a man named Charlie, a Chinese immigrant who died in the building while trying to escape from a group of smugglers. He’s a friendly spirit but a bit mischievous. Several guests have had their belonging go missing. The Bothell Hell House is a dream home on the outside, and a portal to purgatory on the inside. This house was built where an Irish settlement stood almost a century ago, and their spirits aren’t too happy about it. Living in the house can be a tumultuous experience, as one may face levitating objects, strange symbols written on the walls, and loud noises in the middle of the night. Want to see more haunts in the Evergreen State? Check out the top ten most haunted spots in Washington right here!