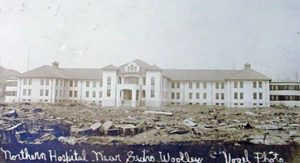 In the early 1900s, Washington’s two insane asylums were starting to get a bit overcrowded. In response, that state had the Northern State Mental Hospital built to ease the strain on the system. It quickly became the most crowded hospital in Washington state, with over 2000 patients by the 1950s. Although it was touted as one of the “good” mental institutions, where patients were treated with relative kindness, doctors at the asylum were known to perform horrifying experiments, including lobotomies and electroshock therapy. Many of the patients were heavily drugged during their stay at Northern State. The worst part of the asylum? Most of the patients weren’t actually mentally ill, but people who were just down on their luck. Patients admitted to the asylum were often suffering common maladies like depression, post-menopausal syndrome, or alcoholism.

At the turn of the century, Washington had two mental asylums in the entire state; Western State Mental Asylum in Steilacoom and the Eastern State Asylum in Spokane. Both had become overcrowded, so the state government authorized the construction of a new facility near Puget Sound. They chose a site near the town of Sedro-Wolley, just north of the Skagit River. The facility would be designed by the Olmsted Brothers, a world-famous architectural firm known for designing New York’s Central Park.

Northern State Mental Hospital was commissioned in 1909 and opened its doors two years later. It quickly became the largest asylum in the state by population. The idea was for Northern State to be a self-sustaining colony for the mentally ill. The institution was decked out with 700 acres of farmland, a dairy plant, a water reservoir, a lumber mill, a quarry, its own sewer system, a steam plant, a greenhouse, a canning facility, a gymnasium, a bakery, and of course, housing for the staff and patients.

Daily Life at the Asylum

Life at Northern State Mental Hospital was relatively pleasant compared to the barbarian mental wards of the 19th century. A sharp contrast from the dungeon-like hellholes of the 1800s, Northern State prioritized a so-called therapeutic treatment that focused on occupational therapy.

Patients who were functional spent the day working at the varying facilities around the hospital. They could farm, help raise livestock, work at one of the lumber mills or factories, or help run the bakery. Recreational activities were also offered, like spending time at the gym or playing board games.

But life at Northern State wasn’t just ponies and roses. Most who were admitted into the asylum weren’t crazy at all and were just suffering short-term episodes. Rebellious teens, depressed young adults, and women going through menopause were often sent to Northern State as a way to “straighten them out.” Alcoholics and drug addicts went with them too. Many of those admitted to Northern State were immigrants, a result of the concept of “racial cleanliness” that was prevalent at the time. Like today, the general idea of mental health was poorly understood, and so people who simply needed a caring soul to talk to were lumped in with people suffering real mental disorders, like schizophrenia and bipolar disorder.

Security also became an issue as the population of the asylum exploded. A murder occurred in 1922 when a patient was murdered. By 1953, the hospital’s population hit a peak of 2,700 people. The superintendent claimed that this was the maximum capacity of the asylum, yet he was pressured to take on more patients.

Like many mental asylums in the 1900s, grisly experiments were performed on the patients, some of which may have been part of a top-secret program called MK Ultra. Patients were subject to “treatments” like electroshock therapy, insulin shock therapy, and lobotomies, all of which are incredibly controversial and considered inhumane. Heavy sedation with powerful drugs was also a common form of treatment.

Electroshock therapy is still practiced today, though the electric shocks are much weaker than they were decades ago. Now called electroconvulsive therapy, ECT is performed by applying short electrical jolts to the brain, which induce small seizures. The procedure has been used as an attempt to cure depression, autism, delirium, catatonia, and several other disorders, with mixed results. Side effects include heart arrhythmias, changes in brain structure, and cognitive impairment.

Lobotomies were a relatively common procedure in the 1930s through 50s, where doctors would drill a small hole through the skull and into the brain to cure various mental disorders. The procedure almost never worked and usually resulted in horrifying aftereffects. Those who were lobotomized often ended up with brain damage and were left severely disabled. Many would lose basic motor control skills, and patients soiling themselves after the procedure was not uncommon. Many died shortly after. Those who remained functional were rendered emotionally blank. They usually were left expressionless and ended up with a permanent “thousand-mile stare.” Among these patients, suicides were commonplace.

Sterilizations were common at the hospital as well. Many were sterilized before being released, with the hospital management claiming that it was “good for society as a whole.” Because many of the patients were immigrants, the sterilizations draw parallels to those uncovered at ICE facilities over the past few years.

Thousands of patients died in Northern State. Rarely were the bodies claimed by the families, and so their disposal was left to the discretion of the state. Those who were known to be Protestant were cremated in an onsite furnace. The remains of hundreds of cremated patients were found stored in tin cans bearing their numbers. Rumors say the remains were packaged in the hospital’s canning facility by other patients. The remains were sent to the Mount Vernon Cemetery and given a proper burial.

Most patients were buried in the asylum’s 1.5 acre plot. According to the hospital’s records, 1,487 bodies are buried on the grounds of Northern State Mental Hospital. While the graves were once marked, swampy soil has caused the majority of the headstones to sink into the ground. Constant flooding eroded the names on the headstones. Even when the asylum was open, the cemetery was neglected. Cows were allowed to graze on the grass and probably left their droppings all over the graves of the patients. Efforts are currently underway to exhume the bodies, identify them, and give them a proper burial.

Controversy began to surround Northern State Mental Hospital, and the asylum movement in general. People petitioned for greater rights for the mentally ill, and the word about the brutal experimental procedures began making their way around. The Washington State Legislature cut off funding to the asylum, and Northern State officially closed its doors in 1976.

Some of the buildings were torn down over the next few decades, including the farmhouses. Today, Northern State remains mostly abandoned and off-limits to trespassers. Some of the facility is still used by the local Job Corps and as a drug rehab center.

The abandoned halls of the Northern State Mental Hospital are crawling with all manners of creepy characters. With so much death, suffering, and high strangeness going back over a century, it’s difficult to imagine that the facility wouldn’t be home to some paranormal activity. Most who were admitted weren’t crazy or mentally ill at all and were wrongfully sent to the asylum to live out the rest of their lives. They were likely experimented on, died in the hospital, and either buried or cremated right on site. It’s hard to believe that these would be happy spirits.

Those who visit the vacant buildings of the asylum have reported some strange phenomena. Cold spots, feelings of being watched, and disembodied voices are all common occurrences. Some have seen strange shadows darting around the graveyard. The most encountered spirit is that of a young girl with a red ball, and a man chasing after her. They’ve been seen running through the maze-like halls of the old hospital, though some have seen the girl standing in the graveyard as well.

Forests, bears, orcas, and…ghosts?? Yes, behind the natural beauty of the Evergreen State lies a spooky past. Some of the state’s most remote areas are also home to some bloody ghost stories, like the story of serial murderer Dr. Linda Hazzard. Far from being a real doctor, she attempted to “cure” her patients using a regiment of extreme starvation and torture. Dozens of wealthy people fell into her grasp, and few escaped with their lives. The Louisa Hotel in Seattle’s Chinatown was once the heart of the city’s Jazz scene, but later became the site of the bloodiest shooting in Washington state. Thirteen people were killed in the Wah Mee Massacre when rival gangs and unpaid gambling debts boiled over in a violent confrontation. The Gessner Mansion in Seattle’s Georgetown neighborhood was a quiet family home until Peter Gessner’s wife left him. Then it became a brothel and gambling den. One of his sex workers got pregnant while on the job, and Peter killed her child out of anger. She committed suicide shortly after, and Peter followed suit when he drank a jug of acid to rid himself of the guilt. Want to see more Washington Haunts? Check out the top ten spookiest spots in the state right here!