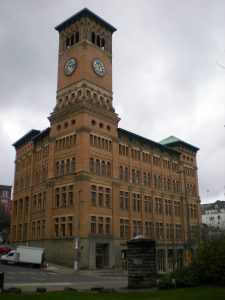 The Old Tacoma City Hall is haunted by a spirit prankster named Gus. Nobody knows who he really was, but they suspect that he may have been a criminal held in the building’s old city jail judging by his apparent disdain for authorities. Gus likes to turn lights on and off, toss things around at random, and lock employees out of their offices. He’s led quite a few security guards and police officers on a wild goose chase, believing they were after an intruder. Little did they know that it was just the ghost of Gus! The Old City Hall was once the thriving seat of government in Tacoma, but has remained mostly vacant since the 1950s and has remained mostly vacant since then. An important piece of history in the Pacific Northwest, the city government and local firms are working together to revitalize the Old City Hall and return it to its former glory. Even with the anticipated renovations, the ghosts within its walls probably aren’t going anywhere anytime soon.

In the 19th century, Tacoma was a thriving but quaint seaport at the western end of the Northern Pacific Railroad. The opportunity for growth brought many entrepreneurs from the Midwest and East Coast, who brought their fancy tastes along with them.

The Old Tacoma City Hall is an example of that fancy taste. Built in 1893, the building is an example of the Italian Renaissance architectural style. The City Hall is complete with tall windows, a red brick facade, and ornate Italianesque designs. It even has a clock tower with a set of four bells. The bells were made by the McShane Bell Foundry in Baltimore, the same company that made the historic Liberty Bell. The bricks are said to have been part of a ship ballast. The Old City Hall cost over $250,000 to build, equivalent to about $7.4 million today.

From 1893 to 1957, the Old Tacoma City Hall served as the center of the Tacoma city government. It held the city jail, law offices, Tacoma Public Library, and the headquarters for many of the city’s governing officers.

The building went unnoticed by the city, serving as a relic of a time long gone. It narrowly dodged being torn down in the 1970s but was saved by the women of the Delphinium Garden Club. It made it onto the National Registry of Historic Places in 1974. The building saw some use from the Garden Club, as well as other tenants, but it remained mostly vacant.

Finally, local businesses raised enough money to revitalize the building in the 1980s. A few boutiques and tenants were able to move in. The Tacoma Bar and Grill moved into the first floor. Things were looking up. At its high point in the 1990s, about 40 tenants had set up shop in the Old City Hall. Yet, routine maintenance was neglected, and the building was once again falling into disrepair.

During the 2000s, the Old Tacoma City Hall was bought out by the Stratford Company. They had plans to turn the building into luxury condominiums. They evacuated the tenants by terminating their leases. Then the financial crisis of 2008 came along, and the Stratford Company was left high and dry. Add to the fact that a burst water pipe inundated the building with over 30,000 gallons of water that same year, causing mold and mildew to thrive in the damp, dark environment. The Old City Hall was beginning to look like a lost cause.

Councilman David Boe to the rescue! With his office just across the street from the Old City Hall, David saw everything take place. Tired of standing by, he sprung into action, getting the media involved. In a series of legal moves, he forced the Stratford Company to either fix the building or get foreclosed on. They did the necessary renovations and sold the Old Tacoma City Hall for $3.5 million.

Today, the Old City Hall is still pretty empty, but that’s going to change soon. SURGE Tacoma occupies the building, and they have plans to once again turn it into a multi-use building. They’re set on attracting several businesses and companies to rent out space, as well as setting aside a few spaces for residential use. They plan on opening up the Old City Hall by 2023.

The Old Tacoma City Hall was designed and built by a local architecture firm called Haverton and McIntosh. Edward Haverton, who assumed the role of the lead architect, was previously the City Architect of San Francisco. He later left his post and moved to Tacoma, where he met Australian architect Colin McIntosh. Together they founded their own practice and designed several buildings in and around Tacoma.

In 1896, just three years after the completion of the Tacoma City Hall, Haverton went missing. Considering that the city’s financial situation had cost him some serious losses, many speculated that he had committed suicide. This was confirmed when his body was found a week later.

The Old City Hall has had quite a long history. The city’s most influential bigwigs, as well as its worst criminals, have passed through the building. Over the years, the tenants of the Old Tacoma City Hall have encountered some strange paranormal phenomena. Most notably, the antics of a ghostly prankster who goes by the name “Gus.”

Nobody knows who Gus is, as there aren’t any historical records that point to a man of that name. But judging by the spirit’s lack of respect for authority, many believe he may be the ghost of a petty criminal who was held in the city jail. Gus is known for playing pranks on the building’s inhabitants, especially the security guards and local police. He’s known to toss objects in the air at random, turn lights on and off, and make weird movements in suspicious locations. This is all to get a rise out of local authorities, who believe the ruckus to be a trespasser. Security guards have chased his shadow down the halls, only to arrive at a dead end. Police have been called to the building multiple times on account of his antics, only to find nobody there.

Gus also likes to stir up trouble with the building’s tenants. He’s been known to lock employees out of their offices. When the Tacoma Bar and Grill occupied the first floor, Gus would often knock over dishes, silverware, and entire bottles of wine. Many say Gus is just lonely, as he stops his shenanigans when the employees try to communicate with him.

The ghosts of the former Tacoma government officials also haunt the Old City Hall. Their shadows are often seen moving around the old Chamber of Commerce. Many former tenants have stories of apparitions rushing through the halls of the building as if they had some sort of important work to do. One ghost in particular has been heard coughing, which has startled many security guards who believed they were alone in the building.

Some even say that a mysterious ghost haunts the clock tower. They’re known to randomly ring the bell every so often, usually at night when the building is empty.

Seattle and the greater Puget Sound area are some of America’s last jewels of natural beauty. The long history of Indigenous culture along with Western exploration has left quite a legacy in the region. In other words, the area is a major hotspot for ghosts! Pay a visit to Martha Washington Park! This patch of greenery on the western coast of Lake Washington was once the home of a terrifying girls’ school, where stories of abuse and neglect were common. The ghosts of the young students often comfort troubled teen girls who pass through the park, while harassing bullies and abusers. Swing by Re-Bar! Although it’s now permanently closed, the once thriving venue was one of Seattle’s grungiest dive bars. Once hosting a Nirvana album release party, the ghost of a leather daddy haunts the building. He’s known to push people around if they stand in his way. Check out the Thornewood Castle! This sprawling estate was once home to the Thorne family. Wealthy as they were, they couldn’t escape tragedy, losing a child to drowning and almost losing another to Scarlett Fever. The current residents often claim they’ve been thrown into one of Mr. Thorne’s phantom parties, only to realize she was definitely not welcome. Want to see more haunted places in Washington? Check out the top ten haunted places in the Evergreen State right here!