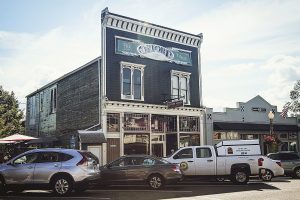 Snoqualmie is a quaint mountain town just a few miles north of Seattle. If you ever pass through town, just know that The Oxford Saloon is simply the best spot in town to grab a drink and a burger. It’s also very much haunted! The history of the saloon goes all the way back to the early 1900s when it was just a grocery store. After being sold to a local entrepreneur, the Oxford became a rowdy dive bar, where violent confrontations were the norm. The upstairs part of the building was converted to a boarding room, though it mostly served as a bordello. Over ten people were killed during the saloon’s wildest days. A policeman turned security guard named Henry was one of the first casualties, having been stabbed to death when trying to break up a fight. His ghost is known to hang out in the lady’s restroom, as Henry’s ghost is just as perverted as he was while alive. The ghosts of Katherine and Amelia also haunt the Oxford Saloon. Katherin ran the bordello until she was found beheaded in a bathtub on the second floor. Amelia was found dead in a closet with a broken neck. Both of their spirits are commonly seen around the building by the bar patrons.

In 1890, the Blackman Dry Goods Store opened up for business. Arthur Blackman was originally from Maine, coming from a family of grocers. Like many Americans at the time, he made his move westward, finding his way to Oakland, California. Not feeling the Cali vibe, he headed on up to the Pacific Northwest, where he found solace in Snohomish.

Arthur arrived in 1885, and just a few years later, he opened up his store. It cost him $5,000 to have the store built, a pretty penny at the time. That’s about $150,000 today. Arthur was a staple in the community, serving as the town’s postmaster for several years and being elected to the city council in 1915.

He was proud of his store, boasting over 20,000 different items. But as his career grew, it became time to let go. Arthur sold the building in 1909. Little did he know that he had started a Washington state legacy.

The Oxford Saloon was established in 1910. Shortly after opening, the second floor was remodeled to make space for boarding rooms, though it quickly became a bordello for the town’s sex workers. The basement was used to host gambling and card games. The saloon was more than a place to drink; it was a place to have fun. Maybe a little too much fun.

Violence was common at the Oxford. Barfights, stabbings, shootings, you name it, and it probably went down. It was a daily occurrence. Rumors have it that at least ten people died in the saloon. The Oxford did keep a few bouncers as security, but they weren’t guaranteed their safety. Such was the story of Henry, a policeman moonlighting as a bouncer at the Oxford who met a tragic death.

Murder of Henry the Policeman

Henry was a local police officer in Snoqualmie. He liked drinking, and he needed extra cash, so he also helped keep the peace at the Oxford. Normally, he handled the drunken barfights with ease. As a lawman, there wasn’t much that Henry couldn’t handle. Unfortunately, he underestimated just how rowdy the patrons at the Oxford could be.

One night, a fight broke out on the staircase leading to the basement. Henry, doing his duty as the saloon’s bouncer, attempted to break up the altercation. But this was an especially rowdy bunch. Henry was stabbed several times and fell down the stairs, where he died.

Henry’s ghost still inhabits the saloon today. He’s often seen on the staircase where he was killed, reminiscing over the memories of his final moments. He’s also been known to be a bit of a perv. Henry has been caught sneaking into the lady’s room, and women have reported being pinched by an invisible man. He usually disappears when confronted.

Bloody Murders at the Bordello

The upper floors of the Oxford Saloon were converted into a boarding house shortly after being purchased by Arthur Blackman. They were mainly rented out by a woman named Katherine, who used the rooms as a bordello. While Katherine may or may not have been one of the many sex workers who worked the upstairs of the Oxford, she definitely was a prominent businesswoman. She kept an eye on her businesses from her office at the local Eagle’s Lodge, where she would make appointments for her high-class clientele.

Katherine was mysteriously found dead on the second floor of the Oxford Saloon. Her body was found decapitated in a bathtub. Nobody knows whether she was murdered or whether she committed suicide and was decapitated afterward. Katherine’s ghost still haunts the upstairs of the Oxford Saloon. Her spirit roams the second floor, and she is often seen wearing a purple dress and bow.

Amelia was one of Katherine’s sex workers who operated on the upper floors of the saloon. She wasn’t working by choice; she had been forced into sex slavery. Like Katherine, Amelia was found dead in the Oxford Saloon under mysterious circumstances. Her body was found stuffed in a closet with a broken neck, and it’s unknown if her death was a murder or a suicide.

Amelia’s ghost is known to haunt the saloon, and many guests claim to see the hands of a woman reach out from the walls and grab them. These are believed to be Amelia’s hands, and guests claim that while it’s a startling experience, they also feel a soothing comfort from her spirit.

Other Ghosts in the Oxford Saloon

Several other ghosts have been spotted around the Oxford Saloon. Most notably, the ghost of an older gentleman wearing a bowler hat. He’s been spotted hanging around the second floor. He was purportedly one of the former owners of the saloon, named Nels Peterson. He owned and managed the bar from 1923 to 1938. Rumor has it that Nels sold the bar to distance himself from the three murders, all of which happened during his tenure as the owner.

Nels was known to smoke cigars, and occasionally the guests will claim to smell a strong odor of cigar smoke in the air. Nels will also appear in photos taken in the bar at random. The pictures are usually warped and blurred on the edges.

Guests have also claimed to see strange shadows moving around the building, which are said to be the ghosts of the numerous bar patrons who were killed in the violent confrontations in the Oxford Saloon.

Today, the Oxford Saloon is one of Snoqualmie’s best taverns, known for their tasty dishes like the Oxford Burger. Locals flock to the Oxford after a hard day of work to wash down their sorrows with a few beers and a side of jalapeño poppers. Of course, the saloon’s hauntiness is sort of a folktale, and the unsuspecting out-of-towner might be caught by surprise when they stop by the Oxford, believing they can grab a beer without being bothered by the ghosts of Henry or Katherine.

Washington is known for its gloomy skies and hazy forests. Rumors have it that creature like vampires and bigfoot call the state home. While that may or may not be true, we do know that the dark forests make a perfect place for ghosts and spectres to hide! Despite having just been built 15 years ago, the Bothell Hell House plays host to some of the worst poltergeists west of the Mississippi. Keith and Tina spent four years being terrorized by these horrifying ghosts and were subjected to random levitations, personal items disappearing, and terrifying noises. A bible even spontaneously combusted in their living room. The Tokeland Hotel is the oldest hotel in Washington state and is home to the ghost of Charlie, who died while hiding from smugglers in the fireplace. A ghost cat also roams around the hotel; a few guests have been woken up by the purrs of the phantom feline. Tourists still flock to the Tokeland Hotel during clam season, and the restaurant chef even uses local razor clams in the clam chowder! Northern State Mental Hospital was the site of horrifying medical experiments, which were often performed on innocent people who had been deemed mentally ill. Thousands of patients died at the hospital, and most were buried or cremated on the hospital grounds. Strange ghosts and figures have been spotted in the ruins of the now-abandoned asylum. Want to see more Seattle area haunts? Check out the top ten most haunted spots in the Emerald City right here!