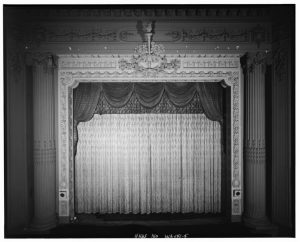 In 1916, Greek immigrant Alexander Pantages was on his way to the top of his show business empire. He had one of his many Pantages Theatres built in Tacoma, with several others built shortly after across Western Canada and California. But the Pantages in Tacoma was different. It was ornately designed, made to mimic the Palace of Versailles. It’s also pretty haunted. The ghost of Alexander Pantages and his lover Kate Klondike can be seen in the building, although, due to a bad breakup, you’ll never see them together. There’s also the ghost of a vaudeville performer who sings ballads from the balcony and a ghostly usher who uses his cold dead hands to guide the guests to their rightful place.

Alexander Pantages arrived from Greece in the early 1880s, first landing in New York City. He worked several jobs throughout his teenage years and early adulthood, including helping to dig the Panama Canal, mining the Klondike Gold rush, and being a waiter and janitor. After traveling North American looking for work, he ended up in Dawson City, where he fell in love with Kate Rockwell, a vaudeville dancer at a local saloon. The two went into business together, and decided to open up a vaudeville theatre, called the Orpheum.

The two had a rocky relationship. Love turned to jealousy, as the two constantly accused each other of being unfaithful. To prove her love for Alexander, Kate blew a large portion of her $400,000 fortune to help him build the Pantages Theatre. It didn’t work, and eventually, Alex left Kate. She later accused him of breaking a promise to marry her and cheating her out of her money. Kate went on to be a homesteader in Oregon, buying herself a large parcel of land and getting married to a cowboy.

After the break-up, Alexander Pantages became one of America’s biggest theatre tycoons. In addition to the theatre in Tacoma, Alexander also ran theatre operations in Vancouver, Seattle, Winnipeg and California. He later joined forces with Paramount Pictures and RCA to get permission to play movies in his theatres. They offered to buy the Pantages franchise, but Alexander refused.

In 1929, Alexander was accused of rape by a 17-year-old vaudeville dancer named Eunice Pringle, who said that Alex attacked her in his office after she approached him to discuss her audition. The accusation went viral, and the media, as well as the public, heavily sided with Eunice. He was sentenced to 50 years in prison, but the ruling was overturned after a second trial in 1931. Alexander had already spent several months in prison. Rumors swirled that RKO and Paramount employed Eunice to frame Alexander.

Despite being judged innocent by the courts, in the eyes of the public, he was ruined. He sold his franchise to RCA for a fraction of what it was worth. He never went back to show business, and despite being a huge force in theatre, is hardly remembered as such today.

Before the Pantages Theatre, the 900 block of Broadway was home to Tacoma’s first department store, as well as its first library, and a saloon. The block was razed in 1908, and shortly afterward, Alexander Pantages chose the location for his Tacoma area theatre. Kate Klondike helped him pay for the $400,000 theatre, which she never financially recovered from.

The theatre was designed by B. Marcus Priteca, a Scottish architect known for designing several other theatres across the country. Priteca actually helped Pantages design his other theatres in San Francisco, Los Angeles, and San Diego. The Pantages in Tacoma was modeled after a theatre inside the Palace of Versailles. The result was an incredibly ornate and extravagant design, with a glazed terra cotta exterior featuring elaborate sculptures, including one of Alexander Pantages inside the building.

The theatre ran vaudeville performances under Alexander Pantages from its inception until the mid-1920s, when it was bought out by RKO after the Pantages rape trial. It became primarily a film theatre, with its name changed to The Orpheum, and showed silent movies and talkies. In 1932, Tacoma native Will Conner bought the theatre and renamed it The Roxy.

The Roxy served as downtown Tacoma’s favorite movie house for several decades. By the 1950s, it was beginning to show signs of wear. The art in the interior was covered up, as the theatre management didn’t have the money or the desire to repair it. Wanting to protect the beautiful building, Conner added it to the National Register of Historic Places in 1976. The city of Tacoma bought it a few years later, and restorations were underway by the early 80s.

The Pantages is Tacoma’s largest theatre, with 1086 seats. It’s one of the three theatres in the city’s Theatre District, along with the Rialto and Theatre on the Square. All three theatres are a part of Tacoma Arts Live, a non-profit organization that manages performing arts in Tacoma’s Theatre District. They also provide education for those interested in theatre, acting, dancing, and music.

The Ghosts of the Pantages

Like so many other theatres across the country, the Pantages has a few ghosts roaming around. Why do theatres tend to be haunted places? Perhaps it’s the history? Or the aspirations of the many performers who never made it? Maybe it’s the good memories that keep spirits attached? In many cases, it’s the original owner of the theatre that stays behind to watch over their legacy. That’s the case at the Pantages Theatre. The ghosts of both Alexander Pantages and Kate Klondike can both be seen around the building, but they’re here for very different reasons.

Pantages has been seen in various parts of his namesake theatre, usually seen in his trademark tuxedo. He blends in pretty well, most people believing him to be another theatre patron or part of the staff. It isn’t until he vanishes into thin air or completely disappears into a wall when witnesses realize that they’ve seen a ghost. They say that Alexander’s ghost splits his time between all of his namesake theatres. The sculpture of Alexander is said to morph depending on the quality of the performance. It’s said to smile for good performances and frown for bad ones.

The ghost of Kate Klondike is also said to haunt the Pantages Theatre. She’s not here to hang out. Kate lost most of her fortune helping Alexander build the theatre, and she’s been bitter ever since. She’s known to haunt the patrons, blowing cold air at them if they speak loudly during performances. Kate’s also known to tap certain guests on the shoulder or whisper in their ears. Some say she’s still in love with Alexander and remains in the building awaiting her lover to return.

Two other ghosts haunt the Pantages Theatre. One is an usher who appears if a guest has taken the wrong seat. They appear at random to help guide the guests to the right place. Sometimes guests will feel a cold hand land on their shoulder if they get lost, and are guided by the usher back to their seat. The ghost of a female vaudeville performer also haunts the theatre. She’s been seen on the balcony singing Italian love songs. She tends to make direct eye contact with the guests before vanishing into thin air.

Ghosts and spirits are abound in the Pacific Northwest. Somewhere in the limitless outdoors lie more ghost stories that will keep you on your toes. The Old Tacoma City Hall was once the city’s seat of government until it was abandoned in the late 1950s. It remained mostly empty, save for the ghost of a young prankster named Gus. He’s known to lock people in their offices and knock over their personal belongings. He’s given the building’s security guards a good scare; they’ve had to search the building several times due to his antics. Olalla was once home to Dr. Linda Hazzard and Starvation Heights. Don’t be fooled by the title; Linda isn’t a doctor, but a murderer. She’s fooled dozens into following her regimen of fasting, or better yet, forced starvation, using her “miracle cure” as a way to get to the deep pockets of her clients. The ghosts of those she killed still haunt the house she used for her grisly experiments. Pioneer Square is just south of Seattle’s downtown core, and it’s known for its long history, good pubs, and seafood. But ghosts also haunt Pioneer Square. The Merchant’s Cafe, Cadillac Hotel, and the Seattle Underground are all interesting haunts in the neighborhood. Want to see more Seattle terrors? Check out the top ten most haunted spots in the city right here!