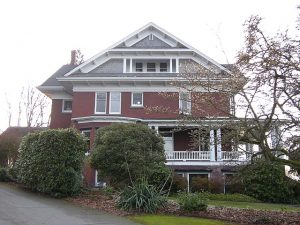 Just 30 miles north of Seattle lies the sleepy town of Everett. The city is home to an extravagant, and very haunted, house known as the Rucker Mansion. The ghost of Jane Rucker is said to reside in the mansion, still lingering around 100 years after her death. She allegedly committed suicide in 1907 by jumping from her bedroom window. Residents and guests alike claim that her ghost is known to randomly appear in the dead of night and play the piano. She’s also been spotted hovering by the window of her old bedroom. The Rucker family was very influential in Puget Sound, helping to lay the groundwork for the city of Everett. After moving to the area from Ohio in the late 1800s, the family established themselves as real estate and lumber magnates. Their mansion is still the most prized possession in the city, having sold for over $3.5 million in 2020.

Long before the Ruckers helped establish modern-day Everett, the Snohomish peoples inhabited the Port Gardener peninsula for thousands of years. They had a fortified winter village in the area called Hilbub.

The Europeans had begun to encroach on Snohomish territory in 1792, when George Vancouver’s expedition landed in the area and claimed the Port Gardener peninsula for England. More expeditions arrived in the mid 1800s, though the village of Hilbub remained mostly undisturbed. That was until the Treaty of Port Elliot was signed in 1855. This forced the Snohomish to relinquish their land to the Washington Territory and relocate to the Tulalip Indian Reservation.

The first permanent European settler was Denis Brigham, who arrived from Massachusetts. He built a log cabin on a 160 acre plot of land for himself. A handful of settlers developed small plots in the region, but it wasn’t until the arrival of the Rucker family that the Port Gardener peninsula saw real growth.

The Ruckers Lay the Foundation

In the 1880s, the Rucker family migrated westward from Ohio. Aiming to be real American pioneers, they went all the way to the Pacific Northwest in search of investment opportunities. They landed in Tacoma, where they hoped to find cheap land upon which to start a lucrative timber enterprise.

The Ruckers were made up of matriarch Jane Morris Rucker and her two sons, Wyatt and Bethel. The two brothers did the hard work of scouting for land around Puget Sound. Wyatt had his eye on a forested peninsula thirty miles north of Seattle. A few Europeans had already settled the area, having forced the native Snohomish to relocate.

Wyatt chose the area because it was sparsely populated and was the expected site of the western terminus of the Great Northern Railroad. Word on the street was that the region was slated to become the next Pittsburg, albeit with its own seaport. Hoping to poise themselves before the boom, the Ruckers bought thousands of acres on the peninsula. They planned on starting a township and had begun partitioning out the land into plots. The town would be called Port Gardener, but more ambitious plans came to mind when they got involved with local Tacoma lumberman Henry Hewitt.

Hewitt and the Ruckers started up the Everett Land Company, which dealt with timber and real estate. They were able to attract big-name investors like John D. Rockefeller and Charles Colby, among others. The Ruckers retained 50% of their original land claims, while the rest went to the company. The plan was to promote the growth of an industrial city on the site, and the Ruckers took serious profits when the town took off in the 1890s. The city of Everett was incorporated in 1893 and became the seat of Snohomish County in 1897.

The Ruckers had enough land and wealth to weather the storm during the economic bust of the late 1890s. The boom cycle came back around during the 1900s, and the Ruckers found themselves well positioned to once again turn a profit. The Everett Land Company turned over its holdings to another company controlled by James Hill, the head of the Great Northern Railway, of which Wyatt Rucker became the treasurer.

As the city grew, the Ruckers profited from the timber industry and the railroad. They had also begun selling their own plots of land, which became the Rucker Hill neighborhood. Having helped establish both themselves and the budding town of Everett, the family decided to begin building a plot for themselves.

In the coming years, the area would see huge economic growth, becoming an industrial powerhouse. Timber, milling, and shipping were the main industries. The Industrial Workers of the World, or IWW for short, had a stronghold in the area. Labor unrest was common, especially during the economic slump. Workers often clashed with businesses, strikebreakers, and police. It all came to a head in the 1916 Everett Massacre when seven workers were shot dead by anti-unionist forces.

Construction on the Rucker Mansion began in 1904 at a cost of $400,000. That’s equal to a whopping $11 million today. The house was a wedding gift for Bethel Rucker’s newlywed wife, Ruby Brown. The Ruckers chose the best parcel of land under their ownership upon which to build the massive home.

Even though the home was meant for Ruby, the family all lived there together. They moved in during the summer of 1905, just 15 years after the Ruckers arrived in the forested lands of the peninsula. Though, their arrival was marred with tragedy. Just two years after moving in, Jane Rucker committed suicide in the home by jumping from her bedroom window.

Rucker Mansion was deemed a National Historic Landmark in 1975 and is one of the most luxurious homes in Everett to this day. It’s got  60,000 square feet of living space on 2.7 acres. At four stories, the mansion is decked out with six bedrooms, six bathrooms, a library, a ballroom, a billiards room, two kitchens, a dining room, a conservatory, and much more. The house was put on the market for $3.5 million in 2020. Who every the lucky buyers are, I hope they’re aware of the ghost that lurks inside.

The Ghosts of the Rucker Family

Jane Morris Rucker purportedly killed herself in 1907 by jumping from her bedroom window, just two years after moving into the Rucker Mansion with her two sons and daughter-in-law. For over a century, the death has been a mystery, as nobody knows what exactly caused Jane to commit suicide. Some local historians debate whether Jane even committed suicide in the first place. Whatever her actual cause of death, there’s no doubt that her ghost still lives on in the Rucker Mansion.

Most residents who lived in the mansion after the Rucker family have reported strange paranormal experiences. Most notably, the grand piano would automatically play in the dead of night. Jane was known to be a great pianist, and many speculate that her ghost takes to the keys when nobody’s looking. Interestingly enough, many have also heard the piano playing when approaching the house during Halloween.

Jane Rucker also reveals her presence in other ways. Many have seen her apparition floating around the house in her bedroom gown, usually in her old bedroom. She can be seen looking out of the same window that she allegedly jumped from, seemingly lost in thought. Other phenomena include strange shadows, unusually sharp drops in temperature, and guests being touched by phantom hands. There are even rumors that the ghost of Ruby Brown lives in the Rucker Mansion as well.

Seattle is the Emerald City, and not for nothing. Outside of the grungy streets, it’s surrounded by nature. But within the city limits, Seattle is home to a number of strange mysteries. The Seattle Underground is a result of one of the most impressive engineering feats in American history. The city was literally raised 20 feet from its foundation to alleviate flooding. The process left behind a network of underground tunnels that became home to shady dealings like brothels, opium dens, and criminal safehouses. While those days are long gone, the Seattle Underground is home to the ghosts and spirits of Old Seattle, still looking to make a buck or two any way they can. The Arctic Club Hotel was built by a group of Alaskan Explorers who made a killing during the Klondike Gold Rush. True to its name, the spirits of the Arctic Club are sure to send chills down your spine. Want to experience more of Seattle’s haunts? Check out the top ten most haunted spots in the city right here!