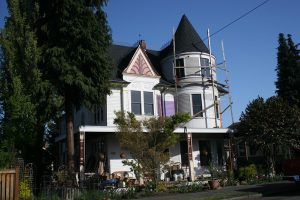 Seattle is far from a medieval city. Founded in the 1850s, it was about 400 years too late. Yet, the city has its own Victorian castle. Nestled in the town’s industrial district is the beautiful Georgetown Castle, a Queen Anne style home surrounded by gates and lush gardens. Also known as the Gessner Mansion, the Victorian-style home is actually one of the most haunted houses in the city. It even looks spooky with its tall spire and ornate architecture. The Gessner Mansion was built in 1902 by a local entrepreneur and avid gambler named Peter J. Gessner. A real family man, Mr. Gessner had the house built for his wife, Anne Elizabeth, and their three children. Sadly, he and his wife separated, and they never got to live in the house together. Consumed by sadness, Gessner killed himself in the house shortly afterward, which cast an aura of darkness over the house. Over the years, the house was used as a brothel, gambling house, and saloon. There were stories of murder, rape, and infanticide, causing the house to gain a dark reputation in Georgetown. Now the home is a private residence, and the new owners keep up with their maintenance. But the renovations haven’t kept the ghosts away. Dozens of spirits live in the Georgetown Castle, including the ghost of Peter Gessner. There’s also the ghost of a murdered sex worker and the spirit of Peter’s niece. Residents have reported disembodied voices, phantom footsteps, and there are rumors of hidden rooms built by Gessner himself.

Peter Gessler was a Seattle area entrepreneur who dabbled in less than savory businesses. He was a blackjack dealer, pimp, and all-around hustler. Hell, he probably even sold bug spray to roaches. Say what you want, the man was wealthy. Despite his seedy ways, he had a family. He decided to focus some of his efforts on giving his family a nice place to live, so he began planning to build a luxurious home for his peeps.

He set his sights on Georgetown. It was quiet and far from the hustle and bustle of downtown Seattle. He picked a nice plot of land and began having the home built in 1902. The result was a masterpiece; a large Victorian house with overhanging eaves and a rounded spire. Although Peter had it built for his family, they would never have the pleasure of enjoying the home together. Anne Elizabeth left Peter for another man while the mansion was under construction.

Peter lived in the house alone. Well, he brought one of his servants, though he was still lonely. He decided to use the house as his base of operations for his illegal businesses. It was far from Downtown Seattle, and the prying eyes of the law. In other words, the Gessner Mansion was now a brothel and gambling house.

Gessler’s niece, Sarah, was said to occasionally visit the house. Rumor has it that she was impregnated by Gessler after he raped her. After the baby was born, someone locked Sarah in the castle’s spire and murdered her baby, then buried it somewhere on the property. Sarah went crazy afterward and was kept locked in the spire room until her death. Nobody knows whether it was Gessler or a john who actually committed the crime.

The party didn’t last long. A year after having his mansion built, Peter killed himself in his bedroom. He did himself in rather painfully by drinking a bottle of carbolic acid. His mouth, face, throat, and internal organs were burned and had begun to dissolve when he was found.

After his death, the house sat vacant for almost twenty years. A new owner took residence in the Georgetown Castle in the Roaring Twenties, and in the spirit of Peter Gessner, turned the house into a brothel and gambling house for the employees of Boeing, who worked nearby. Rumor has it that a sex worker named Mary Christian was murdered in the house around this time. Some say she was strangled by a magician, while others say she was shot by a john.

Eventually, the Georgetown Castle became a legitimate boarding house, though it remained haunted by its dark past. By the 1970s, the Gessner Mansion was once again left abandoned and in dire need of repairs. The new owners attempted to save the beauty of the house. In the late 70s, the house was opened to the public as Castle Inn Catering. It was a good idea, but it didn’t work out. By the 1990s, the Castle Inn went out of business.

After switching hands numerous times, the Georgetown Castle was finally bought out in 2004 by the current owners. They renovated the building and restored it to its former glory. Since it’s now a private residence, no one can enter the house, unless, of course, they’re invited. In the meantime, you’re free to appreciate the Georgetown Castle from the outside.

Ghosts of the Georgetown Castle

While the Gessner Mansion is actually quite lovely these days, you can’t erase its bloody and gruesome history. The people who died in the castle weren’t the happiest people in Seattle, a city already known for its gloomy skies. Their spirits stuck around, unable to leave the house that kept them trapped while they were alive.

Peter J. Gessner is one of the usual suspects. After his suicide, his ghost thought it better to stay, despite the painful memories of his wife. One of the previous residents may have found one of his hiding spots. They found a walled-off secret room, which was probably used for his illegal card games. Part of the room is unusually cold, and the lack of ventilation offers no explanation for the extreme temperature difference, other than a ghostly visitor.

Gessner is usually encountered on the second floor, though he tends to remain invisible. Once in a while, his apparition is seen, though briefly, as he walks from room to room before vanishing. Guests and residents have also heard his footsteps as he waltzes around the house.

The ghost of Gessner’s niece, Sarah, is also still in the house. She’s still trapped in the spire, where Peter left her. Residents say they feel a strange presence in the spire room, and Sarah can sometimes be heard crying in the dead of night. She often appears as a woman in an all-black dress and dark hair. Her eyes are visibly sunken in from the torment of being locked in a dark room separated from her child. The baby that was killed and buried on the house grounds can be heard wailing from under the porch at night.

The ghost of Mary Christian, the murdered sex worker, also lives on in the Georgetown Mansion. The details of Mary’s life are murky at best. Some say she was strangled to death by a magician who was also her lover. Another story says her abusive pimp shot her to death. Mary Christian’s ghost has been seen around the house, recognized by her flowing red hair and white nightgown. Despite being an angry woman in life, she is a relatively peaceful spirit. Those who encounter her report a sense of tranquility accompanying her presence.

There’s a lot to do and see in the Emerald City, even in the afterlife. The city’s long history has left behind a large population of ghosts and spirits. They even have their own hangouts that rival those of the living. Take a stroll through Martha Washington Park! The park was once a burial ground and fishing spot for the Indigenous Duwamish tribe, and later was the site of a haunted girls school. Legends say that a young girl was raped and murdered on the school grounds by a janitor. Today, the spirits of the students at the School for Girls still haunt the park. They bring comfort to the souls of women and girls who have suffered abuse while tormenting the abusers brave enough to stroll through the park. Grab a drink at Re-Bar! Kurt Cobain threw a wild party here when Nirvana released their album, and the ghost of a kinky leather daddy from the 70s still roams the bar after closing. One of the building’s original owners also tends to scare the patrons and staff while also mocking them in the process. Don’t forget to take a tour of the Seattle Underground! The sunken streets of Seattle were once thriving with seedy brothels, drug dens, and gambling houses. Today, you can find the ghosts of bank tellers and sex workers hanging out amongst the ancient artifacts of Old Seattle. Want to take a road trip through the Pacific Northwest? Then check out the top ten most haunted spots in Washington State!