The Ghost of Lou Graham 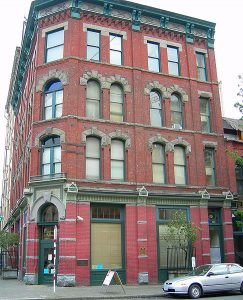 Few women have had as much influence during Seattle’s early days as Lou Graham. She started out as one of the city’s many sex workers and ended up one of the wealthiest landowners in the Pacific Northwest. She rubbed shoulders with the city’s most powerful people and even handed out loans when they were denied by local banks. She funded the city’s education system, helped the city rebuild after the Great Fire of 1889, and even forced a mayor to resign after she was arrested in one of Seattle’s many crackdowns on brothels and saloons. Her ghost still haunts her old establishment, the Washington Court Building. Her ghost phases in and out of existence as she spies on the new tenants, and blasts of icy cold air are common around the building.

Seattle was built on sex work. Although prostitution was technically illegal, being a seamstress wasn’t, so most of the city’s madames passed themselves off as seamstresses while offering their services on Pioneer Square. Many of these women amassed a great deal of wealth, capitalizing on the often lonely men who made their money off the timber industry.

This was often the case in the Western half of the country. As men traveled West to look for work, whether it be mining, logging, or fishing, they often found themselves in a town dominated by other men, all of whom had a thirst for sexual exploits. While “most” women avoided heading West due to the lack of amenities and often dangerous conditions, “working” women, or sex workers, saw a business opportunity. They headed out to Western mining and logging towns, opened brothels, and oftentimes, made a hella lotta cash. Given the higher proportion of wealthy women in the West, this prompted many Western states to grant voting rights to women before the passing of the 19th Amendment in 1920. Washington was among those states, granting women the right to vote in 1910.

The effects were felt throughout the state’s economy. In Seattle, much of the city’s revenue was derived from taxes on brothels, gambling, and sales of liquor. With women gaining the right to vote, many of the politicians and laws supporting the status quo were voted out. This led to a mass closure of saloons as liquor licenses were revoked, and the brothels went with them. While many sex workers saw less opportunity, Lou Graham saw the lack of competition as a business opportunity.

Lou Graham was a German immigrant who arrived in Seattle in 1888, in a city that was just thirty years old. It was a tumultuous time, as suffragists battled it out with the monetary interests over control of the city’s electorate. Lou Graham became one of Seattle’s many “seamstresses,” offering her services to the thirsty loggers, miners, and fishermen who flocked to Seattle for work. Her class and charm earned her a reputation, and she pulled in quite a profit.

As the suffragists gained control of the city, the future of Seattle’s brothels and bordellos was shaky. But Graham saw an opportunity. Instead of catering to the city’s blue-collar and working-class, she took aim at pleasing the city’s high-class clients.

She approached Jacob Furth, a leading Seattle businessman, along with his colleagues, for a loan. Graham explained how she wanted to open a high-class bordello and saloon, where men of stature could engage in deep conversation and indulge in sexual pleasures, all within the same establishment. Lou Graham’s class, charm, and beauty got her the loan, and for the hefty sum of $3,000, she bought the property on 3rd Avenue and Washington. Business was in session.

Graham’s first business would be short-lived. The Great Fire of 1889 ripped through Seattle. An apprentice carpenter left a pot of glue boiling when he stepped out of his shop, causing a fire in a room full of flammable materials. The fire leveled the city of Seattle, leaving the fledgling city in ruins. But all wasn’t lost. The city leaders wasted no time rebuilding, mandating that all new buildings be built with brick, and raising the city streets of downtown, preventing future floods and creating the Seattle Underground.

Lou Graham was one of many business people who lost their property. Luckily, her bordello had been insanely profitable, and she had no problem rebuilding. In fact, Graham’s pockets were so deep that she began offering loans to other businesses who needed to rebuild, effectively funding the rebuilding of a large portion of Seattle.

She rebuilt her bordello on Washington and 3rd Ave. It was a beautiful establishment, a four-story Italian-style brick building. She used only the finest decorations for the interior and employed a slew of beautiful, educated, and intelligent women as her madames. By the mid-1890s, Lou Graham became the most well-known and respected of Seattle’s prostitutes.

But Graham was much more than a sex worker. She rubbed shoulders with Seattle’s business elite. No businessman in the city was taken seriously until they had become familiar with Graham. It was often the case that the city’s elite came to her when they needed financial advice or were denied a loan from the local banks. Graham offered loans at higher interest rates, but one was sure to receive her financing.

Lou Graham had contracted syphilis over the years, which began to take a toll on her health. After the closing of her brothel in one of Seattle’s many “moral crusades,” she set sail for San Francisco. In 1905, at the age of 48, she died due to complications from her disease.

Lou Graham helped build Seattle, through and through. She helped fund the city’s rebuilding efforts after the fire, offering loans and grants to burned businesses. Her establishment served as a meeting place for some of Seattle’s most powerful people, as city leaders and pioneer families often discussed business there as much as they did at City Hall. Her influence was such that when Seattle cracked down on sex work in 1891, she was arrested by a police officer who didn’t recognize who she was. The debacle led to a scandal where Graham was acquitted in court, and the mayor was forced to resign shortly afterward.

Seattle business magnate Jacob Furth put Graham up with his original loan in 1888. But Graham became so wealthy that she returned the favor multiple times. She gave Furth a loan when he was denied by the Puget Sound National Bank and saved his own bank from a bank run during the Panic of 1893 by making a large deposit. Graham also donated some of her funds to Seattle’s wealthy families during the panic, helping them to remain financially solvent through the crisis.

As she neared her death, Graham became one of the wealthiest landowners in the Pacific Northwest. She contributed liberally to various projects spearheaded by the Seattle Chamber of Commerce and donated large sums to the King County educational system. Upon her death, much of her estate went to funding schools around King County.

Lou Graham was also an early pioneer of LGBTQ rights. She engaged in same-sex relationships, and at least some of her madames were trans women.

The Ghost of Lou Graham

Lou Graham’s ghost still haunts the Washington Court building. She can be seen wandering around in her period clothing, floating in and out of rooms as she spies on the new tenants. Ironically, the building today is home to the Union Gospel Mission, sharing the same spatial vicinity as the most well-respected sex worker in Seattle history.

Graham is usually wearing her period clothing and is known to vanish shortly after being seen. Many are intrigued by her appearance and outfit, believing her to be a real person. It’s not until she walks through a wall that they realize they saw a ghost. She’s also a bit of a tease. Sometimes she taps people on the shoulder or whispers into their ear before disappearing. Otherwise, Lou hardly interacts with the building’s occupants and instead opts to observe.

Some other supernatural phenomena have been observed in the Washington Court building. Areas of unusually cold air, disembodied voices, and strange hazy apparitions have been observed around the building. Some have even claimed to see glimpses of Seattle’s early pioneers and businessmen discussing plans for the city’s future.

Seattle’s rough and rugged history has left a plethora of ghosts and phantoms wandering the hilly streets. The Central Saloon is a part of the city’s music history, being the home of Seattle’s grunge scene. The ghost of Jimi Hendrix, along with the spirits of the city’s early loggers and miners, can be seen around the bar on crowded nights. University Heights is a community center that hosts a farmer’s market, homeless outreach programs, and several educational programs. The ghost of a young boy named Brian also haunts the building. The Bothell Hell House is home to some of the most violent poltergeists in Seattle, who are known to toss objects around the house and even set fires. Want to see more Seattle haunts? Check out the top ten haunted hotspots in Seattle right here!