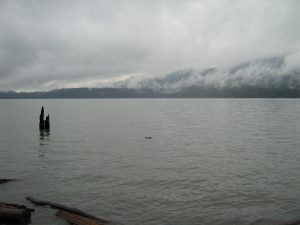 Few towns have so many haunts concentrated in one place. In Washington State, the area around Grays Harbor is notorious for strange and unusual occurrences. Grays Harbor lies on the Pacific coast, about an hour from Seattle in the southwestern part of the state. The dreary weather and crumbling architecture already give Grays Harbor a spooky vibe. But it doesn’t just look haunted; the cities and towns in the area carry some pretty dark secrets. Serial killer Billy Gohl was rumored to have killed hundreds before finally being apprehended. Skulls and bodies were often found along the shoreline. The bar where he worked is still in business, serving up beer, tater tots, and a side of hauntings! Billy’s ghost hangs out behind the bar, and levitating glasses have been spotted on numerous occasions. The Lake Quinault Lodge is a bit away from the coast, but it’s one of the wonders of Grays Harbor County. The ghost of Beverly haunts the top floor, and she’s known to appear to those who stay in her old suite. There’s also the haunted ghost ship, The Lady Washington, known for awakening the spirits of sailors at every port in which she docks. And don’t forget about the Cooney Mansion, built for a local lumber tycoon, which is known to be home to at least half a dozen ghosts.

Grays Harbor is a large bay on Washington’s southwest coast. The Chehalis River flows into the bay, and the Columbia River delta lies just to the south. It’s named for Captain Robert Gray, who sailed into the bay in 1792. The area was originally inhabited by the Quinalt and Queet tribes, along with several other offshoots of the nearby Salish tribes.

By the 1870s, permanent European settlements began appearing, and the area became known for lumber. By the early 1900s, Grays Harbor was one of the world’s largest lumber seaports and was rocked by several strikes and union revolts.

Today, Grays Harbor County is home to about 70,000 people. The region is known for its seafood, old architecture, and being the home of Kurt Cobain. Grays Harbor is also famous for being one of the most haunted places in Washington State.

Billy Gohl was a simple bartender in the small town of Aberdeen. He was born in Germany and came to America in search of work. Before landing in Washington, he had traveled up to the Yukon to search for gold. Being a bartender in a seaside port town, he rubbed shoulders with lots of sailors and was familiar with sailing himself. He eventually landed a gig at the Sailors Union of the Pacific, where he became a union official. He organized with the sailors when they fought for better wages and was arrested during a large strike in 1905.

But Billy Gohl had a dark side. A very dark side. While serving up drinks at the bar or checking in sailors as a union official, he was also committing murders. It isn’t known when Billy started killing, but some say he started on his way back from the Yukon, while others say it was when he became a bartender. Either way, by the time Gohl was a union official, he had gotten good at picking out and killing his targets.

Many had previously suspected him of being a murderer. Gohl was rumored to have killed Jacob Miller and his wife, who disappeared while staying in Gohl’s log cabin. Some also say he burned down a saloon in Alaska. The bodies of several deceased migrant workers washed up on the shores of Grays Harbor while he was a bartender, and a skull was found half-buried near his property.

The union building was the perfect location to scout for victims, offering a constant supply of sailors. Gohl would chat them up as they checked in, asking them if they had family in the area and how much in value they wanted to store. If they didn’t know anyone in the area and had a substantial amount of loot, Gohl marked them as a target. He would usually shoot and kill his victims, then dispose of the body in the river behind the building.

Billy Gohl was finally caught when his accomplice cooperated with the police. Despite being suspected of between 40 and 100 murders, he was only charged with two. He dodged the death penalty and was sentenced to life in prison in Walla Walla Penitentiary.

The bar where Billy Gohl once worked is affectionately called Billy’s Bar & Grill, in an ode to the serial killer who brought fame to the area. In addition to being a nice spot to stop and grab a bite or a drink, Billy’s is also home to the ghost of Billy Gohl himself.

The ghost of a man presumed to be Billy has been seen standing behind the bar on numerous occasions. He can be recognized by his cold, expressionless demeanor. He won’t serve you up a drink if you ask him for one; you’ll just get a cold, hard stare. The ghosts of several sailors and prostitutes have been seen here as well. Many claim that their drinks and plates have slid off the table, as if someone just pushed them over.

The Lake Quinault Lodge is a historic hotel in the Olympic National Forest. It was built by Robert Reamer, who designed the iconic Old Faithful Inn in Yellowstone National Park. The Lake Quinault Lodge has a similar design and feel, though it’s much smaller. Visitors to the inn are greeted with beautiful views of the surrounding wilderness.

The top floor of the lodge is haunted by the ghost of Beverly, a former employee at the lodge. She died when the lodge burned down in a fire in 1924. Guests of the top floor suite, which is named after Beverly, have reported seeing the apparition of a young woman. Many also claim to have had their personal items move on their own, have seen the lights flicker, and witnessed levitating objects.

The Lady Washington is a life-sized replica of Captain Robert Gray’s ship, which sits in Grays Harbor. Many say that ghosts are attracted to the mast, while others say that latent spirits are awakened whenever the ship sails into an old port. They say the ghosts of Gray’s sailors come alive when the ship is docked, as if the memories of their exploits bring them back to life.

Cooney Mansion was built for lumber magnate Neil Cooney. Today, the mansion is a bed and breakfast, and has since been added to the National Register of Historic Places. It’s also extremely haunted. While there’s some debate as to exactly how many ghosts live in the mansion, one psychic puts that number around at least seven. Several psychics and paranormal investigators have visited the Cooney Mansion, and they’ve found overwhelming evidence for hauntings. From wild EMF readings to full-blown apparitions, they also encountered doors opening on their own, disembodied voices, and were also followed around the mansion by phantom footsteps.

The overcast skies, constant rain, and endless forests make Washington State a beautiful backdrop for haunts and spooks. Many will be surprised at the terrors that lie in the Pacific Northwest; after all, it’s not just Bigfoot and pretty-boy vampires you gotta worry about! Ghosts and spirits are alive and well in the Evergreen State! Dr. Linda Hazzard once ran a quiet retreat in Olalla, Washington, where she claimed her regimen of intense fasting could cure any ailment. Wealthy socialites were attracted to her so-called ability to cure disease, as well as her quaint abode, called Wilderness Heights. But really, Linda was a serial killer, and her specialized “diet” actually consisted of extreme starvation and torture. Dozens died, and her quiet retreat came to be known as Starvation Heights. The Black Diamond Cemetery is located in a small mining town near Enumclaw. At night, the graveyard is said to light up with the lanterns of the dead miners, still looking for coal in the afterlife, though some say the lights are just swamp gas. A phantom horse has also been spotted trampling over the graves at night. The Oxford Saloon in Snoqualmie was known as the wildest bar in Washington State. In addition to being a brothel, it also hosted the bloodiest brawls imaginable. Today, the ghost of Henry the Policeman, who was stabbed to death in a bar fight, haunts the lower floor of the saloon. Want to see more haunts in the Evergreen State? Check out the top ten most haunted spots in Washington right here!