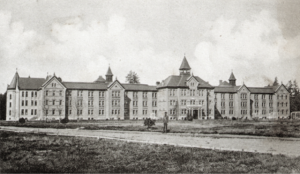 Few places in Washington have seen more controversy than Western State Hospital. It’s part of the Washington State system of mental institutions, along with the now-defunct Northern State Hospital. From the beginning, the mental institution has been plagued by allegations of abuse, torture, and horrifying experiments. From lobotomies to straight-jackets to ice baths, the patients of Western State have seen it all. Many patients were wrongfully admitted without having any prior mental disorders. Part of the hospital is abandoned and lies in ruins. Those who visit the ruins claim to have encountered ghosts and spirits and come face-to-face with a demonic presence. The asylum graveyard is also haunted, with over 3,200 unnamed bodies under the soil. Shadow people have been seen walking through the graveyard, and some have heard muffled screaming coming from under certain graves. Despite the asylum’s patchy history, it’s still in operation today. Even now, the hospital is mired in controversy, with stories of sexual harassment, workplace discrimination, and several escapes.

The Fort Steilacoom Asylum was built by the US Army in 1871, over 20 years before Washington became a state. The asylum grew to encompass over 800 acres, becoming a massive sprawling complex. It had a dairy farm that supplied food to the patients, and the excess was sold to bring in revenue for the asylum.

Despite being rather nice on the outside, the patients at Fort Steilacoom were subjected to horrifying abuses. The patients were neglected, abused, and locked away with no outside contact, sometimes for several months. Sanitation was lacking, and rats and diseases were rampant. In 1875, the Washington territorial government took control of Fort Steilacoom from the Army after stories of the abuse went public. The building was knocked down in 1886, and a more modern facility was built. It was renamed Western State Hospital. But the ruins of the old Fort Steilacoom Asylum lie not too far away.

Western State Hospital was definitely an upgrade from Fort Steilacoom, but the abuses continued. Many were involuntarily committed, being labeled insane despite having no actual mental disorders. Just like today, their assets were seized and put in the hands of a “guardian,” who was court-appointed. Sometimes, people were committed by close friends or relatives who just wanted to get ahold of their riches.

Like at Fort Steilacoom, several patients at Western State were falsely imprisoned, being denied any contact with the outside world. Such is the story of Alice Vinsot. An otherwise healthy woman, she had been committed by a relative in the early 1900s for the sole purpose of taking control of her assets. Unlike other patients, Alice was deprived of any form of contact or entertainment and was barred from leaving her room. She was forced to sit in an empty mental ward for six long years, hardly ever seeing the outside world.

Desperate to escape, she wrote letters begging for help and explaining her situation. She would drop the letters out of her window, hoping someone would answer her calls for help. Eventually, someone found Alice’s letters, and they went to the media. Her story blew up, and an attorney was hired to fight for her case. She was then declared sane and released. Most patients weren’t as lucky.

By the 1940s, Western State Hospital had become overcrowded. It was designed for 2,000 patients but held nearly 3,000. Only over a dozen doctors and 40 nurses tended to the patients. There were stories of violence, abuse, and horrifying experiments. Ice baths, straight jackets, sexual abuse, and outright torture were reported by many former patients of Western State.

Even today, Western State is known for being overcrowded. There have also been allegations of sexual harassment, workplace discrimination, and several escapes. One of the escapees was rumored to be a murderer. The conditions were so bad that Governor Jay Inslee fired the hospital’s CEO, Ron Adler, in 2016.

Like many asylums, Western State was known for its terrifying and inhumane medical procedures. Electroshock therapy, insulin therapy, and lobotomies were all routinely performed at the hospital. The doctors employed these methods in an attempt to control, or “cure,” patients. They claimed the procedures could cure all sorts of disorders and maladies, from emotional distress to schizophrenia. They hardly cured anything and usually left the patients much worse than before.

Electroshock therapy is still done today, but it was much more intense in the mid-1900s when it was first used. Patients were strapped to a chair and subjected to strong electric currents for hours on end. They suffered side effects like PTSD, heart attacks, and even death. Electroconvulsive therapy, as it’s called today, is much milder, with patients under anesthesia while exposed to much softer electric currents.

Lobotomies were the worst and most brutal of the medical experiments performed at Western State. Patients would have a small hole drilled into their heads, and doctors would sever the nerves they believed were causing mental illness. The procedure never worked, and patients were often left with severe brain damage. Those lucky enough to survive or not end up in a vegetative state were left emotionally blunted. Some were incapable of functioning normally. Many who underwent lobotomies died years later due to complications.

Frances Farmer was the most famous patient to be admitted into Western State Hospital. She was an up-and-coming Hollywood star, being featured in films alongside Cary Grant and Bing Crosby. But the big-time lifestyle caught up to Frances, and she began struggling with depression and alcoholism. In 1942, she was arrested for drunk driving and having her high beams on during a wartime blackout. She had a violent outburst during her court hearing and was sentenced to jail time. Her sister-in-law helped Frances avoid doing time behind bars and instead had her committed to a mental institution.

Frances spent five years in Western State and claims she was sexually abused, gnawed on by rats, bound in a straight jacket, and dumped in a tub full of ice. Upon her release, the stories of her abuse made headlines. She made a small comeback in film but never regained her previous level of stardom. The injustices she suffered prompted Nirvana to write a song about her story, called Frances Farmer Will Have Her Revenge On Seattle.

Ghosts in the Ruins of Fort Steilacoom Asylum

The ruins of the original Fort Steilacoom Asylum are still standing…somewhat. Much of the building has collapsed, but the graffiti plastered remains still attract visitors. Some say the ruins are haunted by the ghosts of the patients who once called the asylum home. Those brave enough to visit have encountered strange apparitions, disembodied voices, and the strange sensation of being watched. Some have even been chased out of the building by dark figures. Several people who’ve tried to take photos of ghosts around the building have had their electronics malfunction. According to some rumors, the ruins of the asylum are frequented by a demonic cult.

The asylum graveyard is also said to be haunted. Over 3,200 people were buried onsite between 1876 and 1953. Their graves were never marked with names, just their patient numbers. Many have seen strange apparitions moving around the graveyard at night. Bloodcurdling screams have also been reported around the graveyard.

Washington is known for its endless forests, dreary weather, and massive mountains. It’s hardly a place where one would find ghosts…right? Most of us expect to find Bigfoot before we see a real-life poltergeist, but lo and behold, haunts are everywhere in Washington State. Northern State Mental Hospital is one of the counterparts to Western State and shares many of the same stories of abuse and terrifying experiments. Part of the hospital is abandoned, and many say they’ve seen the ghost of a man and a young girl running through the vacant building. The Black Diamond Cemetery near Enumclaw is the final resting place for hundreds of coal miners, and their ghosts are still kicking. The strange lights seen in the graveyard at night are said to be the lanterns of the miners, and a phantom horse has been seen walking through the cemetery on multiple occasions. The Tokeland Hotel in Toke Point is a great spot to rest after catching clams on the coast, but the hotel is haunted by a friendly ghost named Charlie. He’s nice, but he occasionally steals from the guests. Want to see more Washington State haunts? Check out the top ten most haunted spots in the Evergreen State right here!