The Ice Cold Spirits of the Arctic Club Building 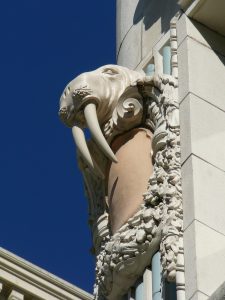 Seattle is the gateway to Alaska. 19th-century explorers often gathered in the city on their way to and from their Arctic expeditions, drinking beers and sharing stories about their exploits. The Arctic Club was created in 1907 as a place for the men to gather. The club was originally established by two explorers after returning from the Klondike Gold Rush and making a killing. E. A. Von Hasslocher and A. D. Coulter used their fortunes to build an extravagant building and social club, themed with a white terra cotta exterior and sculptures of walruses, along with blue and orange accents. The rooms are adorned with blue tiles, antique maps, and photos of Inuit peoples. Despite being a hotel and grand ballroom, the building also served as the home office of an eccentric and boisterous congressman by the name of Marion Zioncheck. The congressman was known for his hard left-wing politics, outrageous antics, and frequent mental health episodes. In August of 1936, Congressman Zioncheck lept to his death from his office on the fifth floor, landing right in front of a vehicle occupied by his wife. They say his spirit still haunts the Arctic Building to this day. Guests have reported phantom footsteps, ice-cold breezes, and disembodies voices. The elevator randomly stops on the fifth floor, as if inviting guests to take a stroll down the haunted hallway. Passersby on Cherry Street often report seeing the splattered body of Congressman Zioncheck splayed out on the floor, as if reliving the memory of his death.

In 1907, two tycoons had just returned from an expedition to Alaska, where they had made fortunes working through the Klondike Gold Rush. E. A. Von Hasslocher, a native Alaskan explorer, and A.D. Coulter, a former Chicago newspaperman, decided to open a social called the Arctic Club. It was a place where those returning from the Cold North could reminisce, tell stories, and form connections.

But there was another club in town, the Alaska Club. Formed in 1903, the Alaska Club had around 300 members. The two weren’t rivals, though. And their relationship was actually quite friendly. They merged in 1908, and voted to keep the name the Arctic Club.

The Arctic Club Building: Making a Mark on Seattle

The social club’s first home was a building on Third and Jefferson, now called the Morrison Hotel. They used the building as their headquarters for seven years, from 1909 to 1916. They then commissioned architect A. Warren Gould to build an official themed headquarters for the group.

The Rainier Club’s Seattle Theatre had to be razed for the building. The new Arctic Club headquarters was to be eight stories tall and have a massive domed ballroom. The Arctic Club Building was the first in Seattle to use terracotta panels over reinforced steel, as well as the first to use colored terracotta. To stay in theme, terracotta sculptures of walruses were installed on the exterior, as well as the sculpture of a polar bear above the Third Avenue entrance.

The Arctic Club Building was extravagant, it housed a cigar store, a bowling alley, a barbershop, a rooftop garden, and a tea room for women. There were also several rooms for playing cards and billiards as well as private dining rooms. Several tenants occupied the building, including offices for Dutch and Swiss consulates. It was considered the most lavish and fashionable social club headquarters west of Chicago. The leather and mahogany furniture and upholstery, the large, arctic-themed murals gave guests the feeling that they were in high-class company.

The last thing the building needed was a bar. So several of the men got together and stole the old bar from their previous location at the Morrison Hotel. They lifted the bar up and out through the window and carried it over to the new location, all without the owner’s permission. Eventually, the owner spotted the bar when paying a visit to the new Arctic Club Building, and before any charges were pressed, the owner was paid for the stolen bar.

One of the building’s tenants was the Congressman of Washington State’s 1st Congressional District, Marion Zioncheck. Born in Poland, Zioncheck arrived in Seattle when he was just a small child. He got into politics early, becoming part of the student government at the University of Washington. He earned his law degree and got in with the Democratic Party, where he made a name for himself with his far-left ideas. He was especially big on promoting Roosevelt’s New Deal. The Democrats and the Washington Commonwealth Foundation helped support his election to Congress in 1932.

Marion’s work as a congressman, where he helped champion and advocate for progressive policies, was overshadowed by his eccentric behavior. Zioncheck often made headlines for his publicity stunts and wild antics, especially with his wife, Rubye Louise Nix. He once drove his car all over the White House lawn. On another occasion, he and his wife took a bath in a fountain in Washington D.C. He even tried to start a fight with a Texas delegate on the floor of the House. The press was always reporting on Zioncheck, and he was being constantly followed by a group of paparazzi, which likely contributed to the decline of his mental health.

In May of 1936, Marion and his wife got into an argument at a party in Washington D.C. She left, sending Marion into a frenzy. He was arrested on charges of lunacy and placed into a mental institution. His wife came back, but Zioncheck was transferred to another location. He escaped by climbing a seven-foot wall and went back to Washington State, where he took advantage of his congressional immunity.

A few months later, in August, Marion was penning a letter in his office on the fifth floor of the Arctic Club Building. In a state of deep depression, he jumped from the window of his office, landing on the pavement below, right in front of a car occupied by his wife. A note was found in his office which read:

“My only hope in life was to improve the condition of an unfair economic system that held no promise to those that all the wealth of even a decent chance to survive let alone live.”

The Haunts of the Arctic Club Building

They say that the ghost of Marion Zioncheck still roams around the Arctic Club Building. Guests say that the fifth floor of the building, where Zioncheck’s office was located, is where most of the haunts take place. The elevator often randomly stops on the fifth floor of the building, as if inviting guests to take a walk. Cold spots are common on the fifth floor. But it doesn’t just get a bit chilly, many say that below-freezing temperatures are often felt around the hallways. Although many are unsure if it’s actually the ghost of Marion Zioncheck, or just the spirit of the Arctic Club Building trying to stay in theme.

Many on the fifth floor also hear and see phantom footsteps, presumed to be the ghost of Zioncheck still roaming around. Some have seen his apparition, though it is rare. He tends to appear and quickly vanish near the location of his old office. Others claim to see floating orbs near his old office as well.

The most striking hauntings are from those who say that they’ve relived the memory of his suicide. Some claim to have briefly seen his mangled body on the pavement, lying in a pool of blood, as if Marion had just jumped to his death. His body mysteriously disappears after doing a double-take. Others say they’ve glanced up at the Arctic Building and saw Zioncheck in mid-fall, though his body disappears in mid-air, never hitting the ground.

Seattle has a long and rich history, from the Indigenous Duwamish and Snoqualmie tribes, to East Asian immigration, to being a base of Arctic exploration. Today’s Seattle is an eclectic mix of high-end coffee roasters, tech companies, and progressive social movements. Seattle is also quite haunted. Centuries of history have left behind countless ghosts and spirits who still roam the streets and century-old buildings, and Jeff Bezos isn’t going to scare them off. The Owl N’Thistle is a pub located in a 100 year old building on Seattle’s harbor. A piano-playing ghost frequents the building, and some say the hauntings are why the building has changed hands so many times. Grab a bite at Kells Irish Restaurant and Pub. Once a mortuary, the building was the first to offer funeral services in Seattle. Eating here might cost you your appetite, as you might be haunted by ghosts from the Spanish Flu epidemic. The Grand Army of the Republic Cemetery holds the bodies of soldiers from the Civil War, and quite a few visitors have seen apparitions of dead or injured soldiers walking through the graveyard. Others say they’ve heard the wails and cries of those who were injured on the battlefield. Make sure to also check out the top ten most haunted places in Seattle right here!