The Jazzy Ghosts at the Hotel Ändra 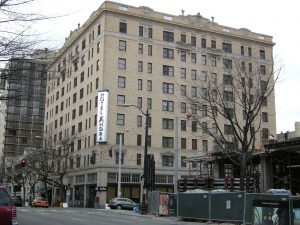 The Hotel Ändra sits right in the heart of Belltown, on the corner of 4th Ave and Virginia. Built in 1926, the building saw its wildest days in the 1920s, when crime was king. Today, the Ändra is a lovely boutique hotel, offering cozy rooms and a whole host of amenities, including two restaurants and a cooking school run by Seattle’s top chef, Tom Douglas. Despite the laid-back atmosphere and Scandinavian influence, the hotel is very haunted. Ghosts and spirits reside in the building, and the renovations haven’t pushed them out. The poltergeists are all leftovers from the building’s days as a criminal hangout. Shootouts, parties, and a suicide all gave birth to the numerous ghosts within the hotel walls. The ninth floor is especially haunted. It seems to be the gathering spot for dozens of ghosts who just love to party. Some speculate that it’s a residual memory from the days when the ninth floor was home to some of the city’s high-class socialites. In the dead of night, guests often hear snippets of loud chatter, glass breaking, and a phantom playing swing jazz on a piano. Many have searched for the source of the noise but a point of origin is never found. Others have seen the ghost of a young woman from the 1930s standing in front of their bed as they sleep, only to vanish shortly afterward. Guest have also reported seeing their personal belongings levitate or outright disappear.

Built in 1926, the Hotel Ändra was originally the Claremont Hotel, an upscale hotel where Seattle’s well-to-do upper class mingled with the gangsters and rumrunners of the 1920s and 30s. Like the rest of the country, the Great Depression brought a crime wave to Seattle. Robberies, murder, gambling, and prostitution were the norm. People resorted to crime when they had nothing else. Money had to be made. Suicides were at an all-time high, as poverty and unemployment drove some to the edge.  The Claremont Hotel hosted all of it within its walls, especially on the ninth floor. The ninth floor was actually residential, hosting high-end apartments. Jazz parties and gatherings were common. Residents would spend their nights playing music and dancing. They also happily ignored Prohibition as they got drunk all night, probably sponsored by the gangsters and rumrunners brewing liquor in the Seattle Underground.

When World War II came around in the 1940s, the Hotel Claremont served as a transfer station for the Women’s Army Corps. The WAC was an auxiliary unit of the US Army, where women were trained in non-combat roles to support the war effort. They were trained to run switchboards, work in mechanics, and polish and maintain weaponry. The WAC was integrated into the Army in 1978.

In the 1960s, a female employee mysteriously fell to her death while working on the upper floors. Nobody seems to know what lead up to her fall. Some say it was a freak accident, while others say it was a suicide. There were no records of the woman’s death, nor was there any word of the possible troubles that could have caused her to purposely jump. Her death is an unsolved mystery to this day.

In 2004, the Hotel Claremont was renovated and became the Hotel Ändra. While the Claremont was renovated multiple times, it never changed names or themes. The Ändra was a complete redesign of the building, one which incorporated Scandinavian themes. The concept pays homage to Seattle’s Nordic heritage and also incorporates sustainability into the design.

The Ändra is a luxury hotel, complete with two restaurants, a gym, yoga, and a complimentary shoe shining service. One of the hotel’s restaurants, Lola, is run by famous Seattle chef Tom Douglas. He also hosts a public cooking school inside the hotel, called the Hot Stove Society.

Ghosts and Haunts at the Hotel Ändra

The building is almost 100 years old. It’s seen wild parties, gangsters, and mysterious deaths. That can mean only one thing…GHOSTS! The Hotel Ändra is haunted, and there are a ton of ghosts living within the hotel’s walls. Leftover spirits, phantom parties, mysterious music, guests of the Ändra have witnessed it all.

The ninth floor seems to be where most of the ghostly action is at. Back in the early days of the Claremont Hotel, the ninth floor was reserved for luxury apartments. Wild parties and jazz music were the norm. Even after the Claremont’s heyday died down, the parties didn’t stop. Guests who stay on the ninth floor say the party is still raging to this day. Oftentimes guests will hear loud chatter, raucous laughter, and glass breaking, the sounds of a raging party. Some guests have been lucky enough to see apparitions and silhouettes of people dancing and engaging in conversation. And no good time is complete without music! The sounds of a jazz piano can be heard echoing through the halls at night. The strange part is, there’s no piano on the ninth floor. Guests who’ve tried to find a source for the music or the loud noises are left confused. There seems to be no point of origin for the sound, almost as if it’s coming from another dimension. Paranormal experts say that the party is what’s called an imprint, or a residual memory stuck in time.

The spirit of a 1920s “Flapper Girl” has been seen hanging around the hotel. Seemingly a straggler from the party, the Flapper is usually hanging around the ninth floor alone, far removed from the party. The very idea of a Flapper Girl as a woman who raged against traditional norms and enjoyed jazz music means she’s probably one of the partygoers. She probably walks the halls to catch a short break from the chaotic dance floor.

Despite the party on the ninth floor, one ghost seems to roam alone. The spirit of a woman dressed in 1930s garb is often spotted in the guestrooms at night. She usually appears right at the foot of the bed as guests are about to fall asleep, standing still and quietly staring into space. Many are startled, while others believe that they were dreaming. She usually vanishes into thin air shortly after appearing. Other guests claim to have seen the woman around the common areas of the hotel. Just like in guest rooms, she stands completely still as she stares off into the distance.

The ghost of a second woman has been seen inside the guest rooms. She appears randomly, then walks around the rooms aimlessly before vanishing. At least one couple reported her appearance to the hotel staff, though she’s sure to have appeared on several occasions. It’s believed that she may be the ghost of the female worker who fell to her death in the 1960s.

Guests also report objects levitating and disappearing. This happens most often in the lobby. A front desk employee claims that a paperweight levitated right in front of her, then slammed back down on the glass countertop. Others have had their personal belongings levitate as well, and sometimes it seems like someone moved their things or shuffled them around. Some say that the worker who died is behind the strange occurrences.

Though the city was founded in 1851, its history goes back much further. Indigenous people have inhabited the area for thousands of years. Wars were fought between the Natives and the newcomers over control of the land. In the end, the conquerors won. Still, many Indigenous stayed on the land they rightfully own. Read about Pike Place Market and the ghost of Princess Angeline! Kikisoblu, also known as Angeline, was Chief Seattle’s oldest daughter, and a member of the Duwamish tribe. Despite her people being forced to migrate to the reservation, Kikisoblu stuck around, remaining in her home on Elliot Bay until the end. Today, Pike Place Market occupies the land where her home once stood. Her ghost can still be seen roaming around the market today, amongst many other spirits. Take some classes at West Seattle High School! The spirit of Rose Higginbotham is said to walk the halls. Locals say she hung herself on school grounds almost 100 years ago. Grab a drink at the Canterbury on 15th Avenue East. The medieval-themed tavern has a violent past. Barfights were common, and one took an especially deadly turn when a man was shot in the face. His ghost is still seen lumbering around the bar, disappearing upon being noticed by bar patrons. There’s also a mysterious pentagram carved into the floor of the basement. Want to escape the hectic city life of Seattle? Take a road trip and check out the top ten most haunted places in Washington State!