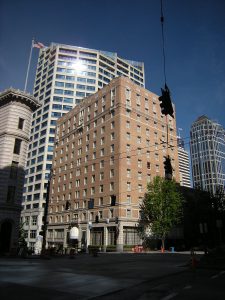 There was a time when drinking in Seattle was relegated to dark, dimly lit rooms. That was before the Mayflower Park Hotel. Since 1973, the historic and haunted hotel has been home to the city’s first daylight bar, Oliver’s Lounge. The bar’s opening was the first time that Seattle residents could take a stroll through the city streets and see people casually having a drink in public through the large glass windows. But despite the bright and breezy lounge on the building’s first floor, the Mayflower Park Hotel has some spooky haunts. One spirit is of an older man who lived and died on the hotel’s sixth floor. He often watches the guests as they sleep and has been seen floating from room to room in the middle of the night. Nobody knows whether he’s watching over the guests or just being a creep, but his presence is spooky nonetheless. Guests have felt his presence watching them, and he spooks them enough to have forced several guests to change rooms throughout the years. Another spirit lives on the eleventh floor, specifically in Room 1120. The hotel claims the spirit is friendly, and the ghost attempts to greet the guests, but they often take off running for another room. He’s also known to play jokes on the cleaning staff.

Long before the Mayflower Park Hotel, the building at 405 Olive Way was known as the Bergonian. Built in 1927, the 240 room hotel became one of Seattle’s mainstays. Stephan Berg was the mind behind the Bergonian, a prominent builder who constructed several buildings and single-family homes around the city. The Bergonian cost $750,000 to build, which today equates to over $11 million. From 1928 to 1946, the building’s first floor was occupied by Bartell Drugs. When the drugstore vacated the building, the Bergonian purchased the leftover soda equipment, including their drink bar. This put the hotel in a good position when the Washington State government decided to pass Initiative 171 a few years later, allowing the liquor to be sold by the drink.

The Bergonian opened its in-house bar, the Carousel Room, in the late 1940s. The Bergonian became the first hotel in Seattle to have its own bar. The bar was carnival-themed, with images of clowns on the walls, and horses and carousels hung from the ceiling. The bar proved to be a popular spot to drink. The original 20-seat bar was expanded to accommodate over 75 people.

By the 1970s, the Bergonian had fallen into disrepair. While the hotel was still in operation, it was in dire need of renovations. Birney and Marie Dempsey, two local entrepreneurs, bought the hotel for $1.1 million in 1974. They renovated the hotel, bringing back many of the original features from the earliest days of the Bergonian. The capacity was reduced from 240 rooms to 160 rooms. Six meeting rooms and a grand banquet hall were added.

The Dempseys decided to build a new bar on the first floor to replace the Carousel Room. The state had just passed a law allowing bars to serve liquor in public view. The law was designed to remove the stigma of drinking in darkened rooms away from the public eye, which encouraged shame, guilt, and alcoholism. The Dempsey’s took advantage of the new law. They got to work on building the Oliver Lounge, a relaxing bar with floor-to-ceiling windows, which allowed the light to pierce through, giving the public a full view of the daily activities at the bar. While some of Seattle’s older citizens were put off by the sight of public drinking, others took it as a positive sign. The Oliver Lounge was built for a higher-class drinker, with marble countertops, calming piano music, and an ornate Italian chandelier.

Ghosts of the Mayflower Park Hotel

At almost a century old, the Mayflower has seen its fair share of history. Though unlike other historic hotels in Seattle, like the Ändra, Arctic Club, or the Sorrento, the Mayflower Park hasn’t seen much action. It hasn’t seen the violence, wild parties, or strange and bizarre characters. In other words, the Mayflower Park Hotel is pretty tame. Yet, the building is still haunted, enough so that a good portion of the guests have had some exciting stories to tell. Two ghosts are said to live in the hotel, though as with any haunted place, there may be many more waiting to be discovered.

An older gentleman who lived and died on the sixth floor haunts the halls of his former home. The man is known for watching the guests as they sleep and has a tendency to scare them into checking out of their rooms. He’s often seen floating around at night, wandering from room to room as he slips through the walls of the hotel. Guests say they know when he’s near, as they feel a strange presence watching them. The feeling alone is strong enough to scare the hotel guests to the bone.

Room 1120 on the eleventh floor is haunted as well. The spirit of a middle-aged man is known to occasionally appear at night, forcing quite a few guests to change rooms. Many guests claim that the space feels haunted on entry, while others say it feels as if someone is watching them or even hiding somewhere inside the room. Some guests choose to stay in Room 1120 for the haunted experience, while others are in for a spooky surprise. He’s known to play tricks on the maintenance workers and housekeepers of the hotel. According to one staff member, there was a night when the mop bucket disappeared midway through the nightly cleaning. He frantically searched for it, finally stumbling upon the mop bucket in the exact spot he left it, except it was one floor below. No one else was present in the vicinity, so the staff chalk it up to the ghost of Room 1120. While the hotel claims the ghost is friendly and maintains that he just enjoys “greeting” the guests, many have had experiences that say otherwise.

Other strange phenomena have occurred around the Mayflower Park Hotel. Some guests claim to have captured “spirit images” on camera. Other guests say they’ve heard disembodied voices at night, and a few claim to have seen floating orbs in the hallways on numerous occasions.

Seattle was founded in 1851, but natives have inhabited the land for over 4,000 years. Centuries upon millennia of history have made the area a haven for ghosts. Seattle’s a much slept-on haunted hotspot, and it’s still waiting to be discovered! Take a walk through the Grand Army of the Republic Cemetery! We know, it’s a long name. Locals simply call it the GAR Cemetary. The old Civil War graveyard is the burial site for the lost soldiers of the war. People strolling through the cemetery have reported living soldiers walking around in full uniform. Sometimes they’re still wounded from battle. They’ve been seen with missing limbs, or worse, missing a chunk of their head. The Cadillac Hotel was built in 1889 and served as temporary housing for those who lost their homes in the Great Fire of Seattle. Today, the hotel is a museum, which was almost destroyed in an earthquake in 2001. Among several spirits, the most prominent is the ghost of a mother who accidentally killed her child. She’s often heard crying at night. The woman tried to perform an abortion on her own and failed horribly, causing her unborn fetus to slowly bleed to death. Come shop at Pike Place Market! The world-famous farmers market is known for showcasing local produce from Washington’s best growers. It’s also home to several ghosts. Kikisoblu, the daughter of Chief Seattle, has been seen wandering the market; the area where Pike Place stands was once her ancestral home. The ghost of Fat Lady Barber is also known to sing lullabies around the empty market at night, putting other spirits to sleep. Want to learn more about Seattle’s haunted history? Check out the top ten most haunted places in Seattle right here!