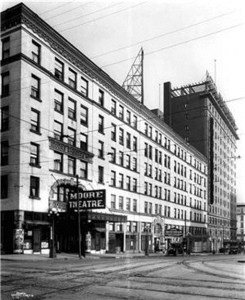 This building has been given the title of the most haunted building in the city. It is said to be so haunted that many ghost hunters have investigated the place. This is because the theatre is old and was built in 1907. With old buildings comes a lot of history.

The theatre is one of the oldest buildings in Seattle. It is the oldest entertainment venue. It was also one of the finest buildings on the West Coast when it first opened in 1907. You can find it on second avenue and Virginia Street. Keep in mind that there is a hotel attached to it. This building was built by a local who was named James A. Moore. He built this because he wanted to add a theatre to his hotel called Denny. Instead of doing this, he would turn management over to a man named John Cort. Later Cort would be a New York impresario. The theatre is over one hundred years old and has seen almost everything. From religious performances to hard rock. Keep in mind that this building was also home to the International Film Festival. Today it can be seen and it has a lot of historic items in it. It even still hosts musical talent and hosts productions from around the globe.

Moore was not born in the United States. He was born in Nova Scotia and would not arrive in Seattle until 1886. He would then team up with William Wood. Wood would eventually become the mayor of Seattle. Wood would develop property in the surrounding areas. The pair had developed close to one thousand acres in the area.

This partnership would end and Moore would continue his journey. He wanted to tame the wild. He would develop many different areas. This includes Lake Union and Rainier Beach. While he was doing this, downtown Seattle wasn’t excluded. Moore was active in many groups including one about a very controversial waterway.

Moore wanted to develop an entertainment venue for the city. He would announce his intentions in 1903. He would tell John Cort, that he was going to manage the theatre he planned on building. Moore wanted this theatre to be the best in America. He then proceeded to tell the public that it would open in about a year and a half.

That same year he would purchase the Denny Hotel. This was located between Third Avenue and Virginia Street. It was on the south side of Denny Hill. Shortly after the Fire of 1889, the hotel would have financial panics. It would sit unfinished for roughly ten years. When the project was completed, it was named the Washington hotel and he would run it with profit for only a short time. The original plan was to expand this hotel and add the theatre to it.

However, Seattle had different ideas. They would do the Denny Regrade project and it would make Moore’s plans unachievable. They would level off Denny Hill. It wasn’t long after this that he had to fight to save his hotel. It was in 1905 that the hotel would announce that it was adding a theatre. It was at this point that Moore still wanted his original plan to work. Again the city would shut down his ideas because Denny Hill would be completely leveled. This also meant that the luxurious hotel would also be gone.

It was clear that his hotel would not have a hill to stand on soon. Moore decided to make new plans. He still wanted to make his theatre dream a reality. He also still wanted a hotel. Keep in mind he still owned land that was located at Second Avenue and Virginia. He would have a theatre and hotel to go here. He just wouldn’t have it be his Washington Hotel.

Before the breaking of the ground, E. W. Houghton was hired to do the design of the hotel and theatre. He was one of the best architects at the time. Keep in mind that Houghton had many experiences in designing theatres. The architect would arrive just before the great fire and that meant that he had great opportunities to practice his skills.

The plans that were made for the theatre were very elaborate and different. There are many designs that he incorporated that were never used before. He would never even use support posts for the balcony. He did this so that people below the balcony wouldn’t have the stage blocked from view. These posts were part of theatres at this time. This balcony would be supported by steel girders. Keep in mind they would weigh about 22 tons. It was a new idea and it was admired.

The theatre was more than just a theatre. It was also a hotel that was six stories. The hotel is still in operation today. 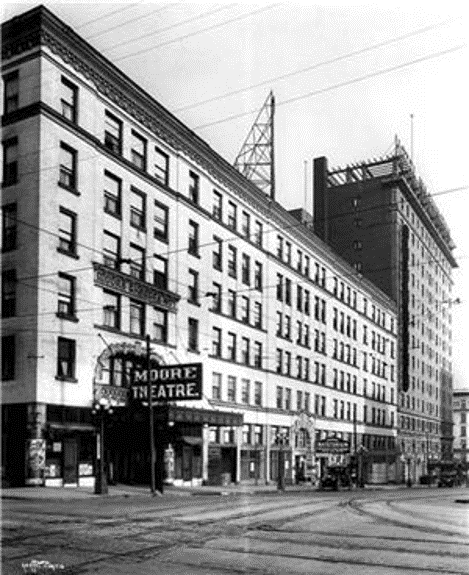 When the theatre opened it was luxurious. It was like no other theatre at the time. There were no stairs to the balcony. They would use inclines. It was said that the inclines were so wide that a vehicle could fit up them. There was a smoking room for men and a women’s lounge as well. This was the largest theatre in the United States at the time. It also had marble floors that were said to cost the theatre over thirty thousand dollars. The theatre was designed based on Greek mythology. This is why the color scheme was ivory, old rose, olive, and gold. The carpets were done in crimson red color and this matched the drop curtains which was gold embroidered. The theatre would seat 2,436 people.

Because it was such a large area, safety was a concern. That is why an asbestos curtain was installed behind the drop curtain. Keep in mind this was before we knew that asbestos was dangerous. They had claimed that the theatre would be emptied in two minutes if a fire were to occur. To this day, no one has had to deal with a fire. 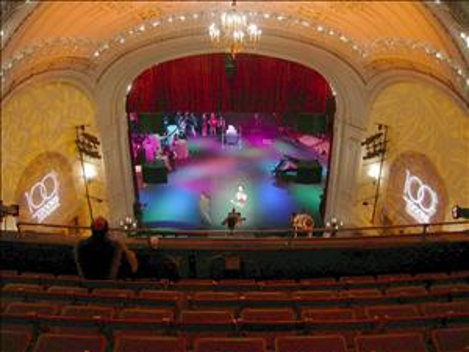 The theatre is old and that means that there is likely some unusual activity that occurs. One of the rumors is that it is the site where Kurt Cobain had overdosed and died. This is a band member of Nirvana.

Some say that Mr. Moore himself still resides here as well. Plus, people state that women who acted on the stage long ago are still lingering around as well.

One of the weirdest things is that cigar smoke is smelled a lot. No one smokes in the theatre anymore. Plus, a single-seat only has this smell. No matter how many times it has been reupholstered or cleaned, the smell still lingers. Not to mention, people will often feel like they are being watched when they are in this theatre.

The Moore Theatre is a well-known attraction that many people visit each year. It still hosts musicians and traveling productions. The original plan may not have worked as it should have, however, Mr. Moore got his wish of having a hotel and theatre in one. Plus, both of them are still operational to this day. With that being said, there is a lot of history surrounding the theatre.

With a lot of history comes a lot of unusual activity. No one believes that anyone has died in the theatre, however, there are still hauntings. Many people believe that Mr. Moore himself is still watching the theatre to make sure it is taken care of to his standards. People state that some of the performances would be shut down due to unusual instances. These are the performances that Mr. Moore would not have liked because they were a little riskier.