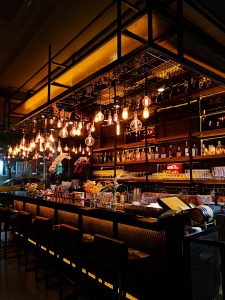 Looking for a place to hang in Washington State? Say no more! We’ve got the top spots where you can grab a drink, a beer, and of course, catch a few spirits having a good time in the afterlife. These Seattle-area bars and restaurants are noted for their spooky history, but the food’s good too! So good, in fact, that they’ll bring the dead back to life. Many of the ghosts that haunt the bars are pretty friendly, except for Billy Gohl, the serial killer. We suggest that you stay out of his way.

Before the popular Irish-influenced bar and restaurant opened its doors, the Butterworth Building held one of Seattle’s first mortuaries. Having had very little competition, the bodies piled up high. Mining accidents, disease, and the violence-plagued streets of Seattle provided no shortage of bodies. And with any building that specialized in death, the spiritual aura became something like a local folklore.

Today, Kells Irish Pub is a popular dining spot for tourists and locals alike who swing through the Pike Place Historic District. The authentic Irish dishes and drinks bring in those looking for good Irish pastries, Jameson chicken wings, or Irish coffee. But food and booze aren’t all you’ll find here. The spirits of the mortuary are still haunting their old stomping grounds.

The ghost of a young red-haired girl is known to play pranks on the guests. She’s most active during the day when children are allowed in the restaurant. They say she moves around chairs before guests sit down and often plays with other children’s toys. Many believe the girl died during the flu epidemic in 1918. The ghost of an older man named Charlie also haunts the pub. He likes drinking Guinness and usually appears when there’s live music. He can be recognized by his old-school derby hat.

Nestled in the heart of Seattle’s Pioneer Square, the Merchants Cafe is a nice place to get a taste of the historic side of the city. Maybe a bit too historic, as the paintings of the sex workers who once worked on the upper floors still hang on the walls. Some say the paintings move, as if they’re animated, and a few patrons claim the eyes follow them around the room. But it’s not just the paintings; some of those women still inhabit the building. A female ghost is said to haunt the restroom in the basement, slamming the stall doors and randomly turning off the lights. There’s also the ghost of a man who died in a deadly fire. He’s been seen around the building, sporting a charred black coat and a burnt face to match.

Less than an hour north of Seattle lies the quiet and snowy mountain town of Snoqualmie. The Oxford Saloon is a must if you pass through. They’ve got beer, burgers, and of course…ghosts! What else could you ask for? The Oxford used to be the rowdiest bar in the state, offering sex, cheap booze, live music, and nightly brawls. Violence was common at the two-story pub, and at least ten people were said to have been murdered over the years.

The ghost of Henry still haunts the bar to this day. The security guard and policeman was stabbed to death trying to stop a fight, after which his body lifelessly rolled down the stairs. He still haunts the basement staircase to this day, casually watching over the bar as if he still works there. The ghost of Katherine, a businesswoman who ran the upstairs bordello, also haunts the upper floors. She was found beheaded in a bathtub in her upstairs office. The spirit of a woman named Amelia has also been spotted. She was murdered by an unknown john, and her body was found strangled to death in a closet.

This Irish pub offers good food, booze, and live music right on the waters of Elliot Bay. But this place has some history, dating all the way back to the early days of Seattle. The Coleman Building was built from the ruins of the Great Fire of 1889, which effectively leveled the city of Seattle. Several businesses occupied the building after the fire while looking for a permanent home, including Wells Fargo. The building has been renovated several times since.

The Owl N Thistle opened its doors in 1991 and has been a local hit since. But the service is so good that it attracts both the living and the dead. Ghosts have been known to frequent the pub, although they’re pretty low-key. One spirit is known to rock the piano every once in a while, and they’re pretty damn good at it! Another unseen presence is known to target the staff, usually standing directly behind them, looking to get a good scare.

Among the many haunts of Grays Harbor is Billy’s Bar and Grill. It seems like any old small-town food and beer joint, but it hides a grisly secret. It was once a union building where serial killer Billy Gohl conducted his murders. Billy was savvy; he used his post as a union official to choose suitable targets, presumably sailors who didn’t have any family in the area, and had a decent amount of cash on hand. Billy would shoot or strangle his victims, then dispose of their bodies in the river behind the building. Despite having killed nearly 100 people, he was only charged for two murders.

Today, Billy’s Bar and Grill serves the people of Aberdeen and greater Grays Harbor area, serving up good food and booze. The menu caters to its heritage of seafaring sailors, but everybody can find something good at Billy’s, except for the easily frightened. The ghost of Billy Gohl is said to haunt the restaurant, having been spotted eerily standing behind the bar. He usually has a cold expression, and no, he won’t serve you a drink if you ask for one. Billy will just respond with a cold stare. Some patrons have reported floating silverware and have had their glasses knocked over to the ground.

The COVID-19 pandemic has forced many businesses to close their doors, and unfortunately, Re-Bar was one of them. The classic dive bar has been a cornerstone of Seattle’s LGBTQ community and music scene for decades, and it’s sad to see it go. Nirvana even had their album release party for Nevermind at Re-Bar, and the scene was so wild that the band was kicked out of their own party after a huge food fight.

Ghosts loved hanging out here too, and they were just as rowdy as the crowd. The ghost of a 70s leather daddy was known to haunt the bar, and he haunted the building with a vengeance. He often pushed and shoved patrons out of the way, and those who felt his wrath often heard a loud whoosh as he passed by. The spirit of the original owner of the building also haunts the building. She’s quite mischievous and loved to mess with the staff after closing time, randomly appearing and playing pranks as they tried to clean up.

All these haunted bars and restaurants are proof that even if you’re dead, you can still have fun in Seattle! The city’s always been a pretty lively place, even from the very beginning. Lou Graham was a sex worker whose business savvy ways catapulted her into Seattle’s elite. She ran a brothel, now the Washington Court Building, where the city’s most influential people came to build networks and enjoy themselves. Graham became so wealthy that she was able to fund city projects, entire financial institutions, and even the county school district. Her ghost still haunts her old building, peeping on the new tenants and playful teasing them as they move about. The Central Saloon was once the go-to spot for gold miners, loggers, and sailors looking for a drink and a lady to bed with, though it later became the birthplace of the city’s budding grunge scene. Seattle’s music scene was forever changed when Nirvana played their first Seattle show there in the mid-80s. They say the ghost of Jimi Hendrix himself haunts the venue, as he used to hang there in his youth. Apparently, he just wants to check out the new talent. The Louisa Hotel in Chinatown was the home of Seattle’s jazz scene. The upstairs boarding house also hosted Asian immigrants arriving in town looking for work. The blend of cultures created a unique environment in the nightclubs downstairs. In the 80s, the building was rocked by a horrifying mass shooting that left 13 dead. Their ghosts still haunt the building to this day. Want to see more haunts around Seattle? Check out the top ten most haunted spots in the city right here!