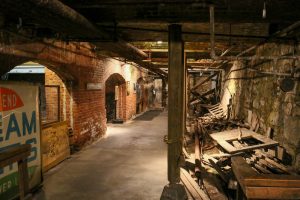 The early American settlers of Seattle didn’t put much thought into city planning. Most of the town was at sea level, causing heavy flooding when the waters rose. Secondly, just about everything was made out of wood, making Seattle a massive tinderbox. It all came to a crux in June of 1889, when the Great Seattle Fire wiped out much of downtown, causing today’s equivalent of half a billion dollars in damages. In the aftermath of the restoration, city leaders decided to elevate the city streets by about 12 feet, leaving behind a network of underground tunnels that remain to this day. Once businesses left the tunnels for their new street-level storefronts, they became a seedy hangout for gamblers, sex workers, and drug users. Today, the Seattle Underground is mostly abandoned. Or at least, by the living. There are plenty of ghosts who haven’t left their spooky underground hangout behind. The tunnels are known for ghost sightings, particularly the old bank and a brothel called the Oriental Hotel. The most encountered spirit is Edward the bank teller, who was killed in a shootout. There’s also a woman who was killed behind the bank vault, as well as the apparitions of several sex workers seen strolling through the tunnels. There are several instances of ghostly apparitions having been caught on camera, and orbs of light are commonly seen floating around the tunnels.

Indigenous peoples have lived in the Puget Sound area for thousands of years. They know the layout of the land. They knew the area was prone to floods. So when the American settlers arrived and decided to build the lumber trading post that would become Seattle, they were too ignorant to consult with the locals before planning their city layout. Most of the downtown area was built on the beach, placing it right at sea level. As one can imagine, the early days of downtown were rife with flooding. Add in the fact that sewage treatment wasn’t really a thing back then, and you had a stinky problem washing right up at your feet.

The second big problem? Seattle’s city leaders at the time were a bit too resourceful. They took advantage of the lumber industry and built damn near everything out of wood. From the buildings to walkways to bridges, even the sewage pipes were made with hollowed-out logs. Seattle’s wet climate meant that it was probably a very damp environment, so nobody was thinking about fire. But still, these were the days before electricity. Chemicals like kerosene, turpentine, and pitch, all very flammable, were common inside buildings, being used for construction or fuel for lanterns. The city was a tinderbox. It just needed a spark.

The Great Fire of Seattle

In June of 1886, a fledgling carpenter put a pot of glue on the stove and brought it to a boil. He forgot about it, and the glue boiled over. It caught fire in a room full of sawdust, wood, and turpentine. Needless to say, the fire spread rapidly, and the room was engulfed in flames within the span of a few minutes. Flammable liquids caught fire and permeated the cracks of the building. Within a few hours, multiple city blocks were on fire. The wooden infrastructure helped the fire spread, causing explosions when the fire reached saloons and breweries. Just 24 hours later, most of downtown had been destroyed. After assessing the damage, city leaders began the plan to rebuild.

Birth of the Seattle Underground

To raise the streets, walls were built separating the storefronts from the road, creating small alleyways. The streets were filled in with concrete piece by piece. Businesses still operated out of their lower-level storefronts, though they had already begun to build their upper-level storefronts as well. It was a strange time to live in Seattle, as pedestrians had to climb up and down ladders to go from the street to the store. Fully furnished businesses and adorned doorways hung 12 to 15 feet above the ground.

Once construction was finished, business owners moved up to the new street level. Some continued using the lower level for their shops, and others even operated their entire business from the Underground. In 1909, the city condemned the tunnels for fear of the bubonic plague, just two years before the Alaska-Yukon Pacific Expo. Businesses were forced to relocate. What remained were tunnels that were furnished with the leftovers of a past age. As with most abandoned areas in big cities, the Seattle Underground became a haven for the city’s homeless. Drug dens, gambling houses, and brothels flourished.

The tunnels were cleared out by the 1940s and remained mostly forgotten until the past few decades. Journalist Bill Spiegel played a big part in bringing attention to the tunnels when he started doing tours in the Underground in 1965. Today, the Seattle Underground is mainly a tourist trap, attracting history enthusiasts and ghostly tour groups. All sorts of items remain in the tunnels, from antique signage to random pieces of furniture. While it looks like it may have been purposely furnished to add an aura of authenticity, the reality is that everything in the Underground was there from the very beginning.

Ghosts of the Seattle Underground

Throughout the years, the tunnels underneath Pioneer Square have collected dust, dirt, random treasures, and of course, human spirits. Plenty of ghosts live in the Seattle Underground, some from the days when it was a sketchy hangout, others from way back when the tunnels were above ground. The two main haunted hotspots of the Underground are the old bank, and a former brothel called the Oriental Hotel.

In the early days, Pioneer Square was rife with violent shootouts as police and businessmen fought for control of the city. Innocent bystanders were often caught in the crossfire. This is the story of poor ol’ Edward the bank teller. Edward worked at the city’s old bank, which at the time allowed 24/7 withdrawals for gold prospectors. He was shot and killed while working behind the teller’s cage, probably the result of the city’s ongoing feud, as it’s unknown whether it was a robbery or shootout.

Edward’s apparition has been seen near the teller’s cage of the old bank. He’s recognizable by his tall figure, suspenders, top hat, and impressively large handlebar mustache. His voice has been caught on EVP, and some tourists say they’ve been able to hold a short conversation with Edward. The ghost of a woman who was killed behind the bank vault has also been seen in the area. She’s been caught in a few photos, and tourists claim to have seen orbs and felt cold spots in the area where she usually appears.

The Oriental Hotel was once a brothel, where the “seamstresses,” code for sex workers, would provide their services. Some say they’re still working in the afterlife, as female silhouettes have been seen prowling the tunnels near the area.

The Seattle Underground has countless other ghosts hiding in its midst. Faces are often seen in the windows at the tunnel’s entrance. There’s the transparent apparition of a woman in an all-white dress who has been spotted in different parts of the tunnels. One couple caught another mysterious woman wearing a Victorian-era outfit while taking a selfie. Though the Seattle Underground has been long abandoned, its spiritual presence is alive and well.

Welcome to the Pacific Northwest! PNW represent! Besides being a haven for outdoor recreation, there’s also a ton of ghosts and spirits hanging around. Get some fresh smoked salmon at Pike Place Market! The century-old market is home to several ghosts, including Princess Angeline, Chief Seattle’s oldest daughter. Her cabin stood where the market is today, and her spirit is often seen strolling around at night. Catch a show at the Moore Theatre. They say that the ghost of Mr. Moore can still be seen hanging around the theatre, along with his troupe of female performers. Want to spend a night at the Sorrento Hotel? It’s considered one of the most haunted places in the city, if not the entire state. This Italian-inspired hotel is home to the ghost of Alice B. Toklas. Besides being the creator of the oh-so-loved pot brownie, she also played a mean piano. Guests and staff of the Sorrento Hotel say they can hear Alice playing the piano in the penthouse suite on days when the room is empty. Before making your next visit, you should check out the top ten most haunted places in Seattle right here!