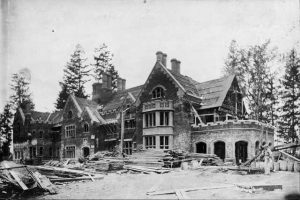 There are very few genuine castles in the United States, and only one on the West Coast. Thornewood Castle in Lakewood is a grandiose English Tudor Gothic-style mansion that sits right on American Lake. The sprawling estate brings images of spooky scenes from shows like The Haunting of Bly Manor. If you weren’t in the know, one would guess that it was actually filmed there. The castle was built in 1911 for Chester Thorne, who at the time was one of the wealthiest men in Washington State. Over the course of a century, ghosts and spirits have made themselves cozy in the spacious mansion. The current residents often catch glimpses of parties and social gatherings, where early 20th century socialites are seen drinking, mingling, and occasionally break a wine glass. The scene is often compared to taking a step back in time. The spirits of the Thornewood Castle also don’t like lights. They tend to blow out candles and unscrew lightbulbs when nobody’s looking. The owners often have to screw the lights back in, only to find that a different lightbulb has been removed. The ghosts of Chester and Anne are both present in the building, as are their children. Chester is most often seen in his second-floor bedroom, where he passed away.

In the early 20th century, Chester Thorne was one of the wealthiest men in Washington State. He founded the National Bank of Tacoma and helped fund the dredging of the city’s port. In 1908, looking to settle down, he bought a 100-acre plot of land near American Lake in what is now Lakewood. Mr. Thorne had plans for an exquisite mansion, one of the biggest on the West Coast.

Chester wanted his mansion to be as authentic as possible. He purchased a 400-year-old mansion in England and had it taken apart and shipped to Washington. It took a fleet of three ships sailing around Cape Horn to deliver the materials to the construction site. The oak staircase, front door, and oak paneling all came from the English estate. The red bricks were imported from Wales.

Around the estate grounds are numerous gardens, fountains, and sculptures. Stained glass salvaged from 15th and 16th-century churches can also be seen in some of the windows around the castle. The Thornewood Estate contains over 27,000 square feet of living space, including 54 rooms and 22 bathrooms. Today, Thornewood is a historic site used for weddings, parties, and nightly rentals. It’s also open to public visits and often used for films and photoshoots. Stephen King’s TV series Rose Red was shot on the property. Thornewood Castle is currently owned by Wayne and Deanna Robinson, who bought it in 2000.

Life and Death at the Thornewood Estate

Chester Thorne was known for his generosity. Though he had lavish parties and gatherings with the other wealthy denizens of Puget Sound, he was still a giver. Chester helped found Mount Rainier Park, helping to conserve the alpine forests around the mountain. When Tacoma was hit with an economic depression in 1893, he donated money and supplies to those in need. He helped out his fellow citizens and expected nothing in return.

The Thornes lived a happy life, but it wasn’t free from tragedy. Anna, Thorne’s daughter, contracted Scarlett Fever, causing her to go deaf in one ear. She had to wear a hearing aid, which she was embarrassed about. She would often go into hiding when her parents had their social gatherings. Another one of the children, one of their boys, died when he drowned in one of the many ornamental ponds on the property.

The Thorne family lived in the home until Chester died in 1927. Anna took over the Thornewood Castle afterward, living there until 1959.

Hauntings of the Thornewood Castle

The Thornewood Estate was said to be haunted long before the Robinsons moved in. However, they claim that the hauntings have increased steadily since 2002. Unlike the way the mansion is depicted in the series Rose Red, the ghosts are far from evil, and not at all malevolent. They tend to be more on the melancholy side, if not outright mischievous.

The Robinsons claim that the most common encounter is the phantom party in the mansion’s great hall. Deanna says that one night while reading a book, the room suddenly lit up with the sounds and sights of a cocktail party. There were at least 100 people dancing, socializing, and drinking, and someone even dropped a glass. Though the scene was hazy and ephemeral in nature, Deanna could still see it clearly. It was as if she stepped back in time, back to when the Thornes owned the house. She said that even though she owns the estate, she suddenly felt like an intruder, as if the ghosts were disturbed by her presence.

The ghost of Chester Thorne is often seen around the estate. He’s mostly seen around his bedroom on the second floor, where he died of old age. Chester’s ghost is a residual, or a ghost that follows a routine. He always walks through the front door of his room, walks past the bed, and disappears into his restroom. Chester’s ghost is also seen around the lawn and near the fountains around the property. The Robinsons say they’ve seen him in on his horse, or standing in the lawn wearing horseback riding gear while holding a whip.

Anne Thorne, Chester’s wife, can be seen in a second-story window overlooking the garden. She and Chester are occasionally seen locking arms at the top of the staircase, dressed as if they’re going to an event. They never move. They simply appear for a brief moment, then vanish.

The ghosts of two of the Thorne’s three children are present in the estate. Anna, their eldest daughter, can be seen sitting on the porch, one of her favorite retreats whenever her parents held their high-class socials. Their youngest son often appears standing on the lawn, in front of the ornamental fountain where he drowned.

Anna’s bedroom is one of the more haunted rooms in the house. She often hid there when the Thornes had guests, as she was ashamed of her hearing aid. Today, her room is often used for bridal parties during weddings, and guests claim to have seen Anna’s apparition in the room on multiple occasions. Mysterious dark shadows have also been seen moving around in the room. Those who spend the night in Anna’s room also claim to hear the sounds of a grand piano at night.

The ghost of Anna’s second husband is also seen in the room across from Anna’s bedroom. He wears a brown suit and shows up to serve the guests, offering to do their laundry. One guest found his clothes neatly folded over his shoes shortly after seeing the ghost.

While the ghosts of the Thornewood Castle aren’t bad or evil by any means, they are pretty mischievous. They don’t seem to like bright lights, so they tend to blow out candles and unscrew lightbulbs when they want to dim the room. Deanna says she often has to relight the candles and fix the bulbs, only to come back into the room to find a different lightbulb unscrewed and the candles blown out once again. She puts the blame on Chester Thorne’s ghost.

According to local historians, the Thornes enlisted the help of local Native tribespeople to help build the home. They placed amulets around the property and cast spells to spiritually protect the estate. No word on whether or not it worked, but Deanna and other guests have claimed to see energy spirals around the property. They believe that they may be tied to the amulets and spells cast by the Indigenous construction workers.

The Puget Sound is a beautiful region known for its rainforests, mountains, and waterfalls. It’s also chock full of ghosts! The gloomy skies and constant rain bring solemn spirits who spend their time sulking over their old lives. Look no further than Georgetown Castle. It’s not a real castle like the Thornewood Estate, but it’s a grand house nonetheless. The Georgetown Castle is haunted by the sad spirits of a pimp and gambler named Peter Gessner. Sex workers, card games, suicide, murder, rape; it all happened at the Gessner Mansion. Come chill at the Arctic Club Building, where the ghost of a wild Congressman named Marion Zioncheck haunts the halls of the fifth floor. Zioncheck fought for better living standards for the poor, and he drove his car all over the lawn of the White House to do it. He worked out of the Arctic Building until he decided to commit suicide by jumping from the window of his office. Spend a night at the Mayflower Park Hotel, where the ghosts of two older gentlemen are known to spy on the guests, sending them running out of their rooms in the dead of night. You should also read up on the top ten most haunted spots in Seattle right here!