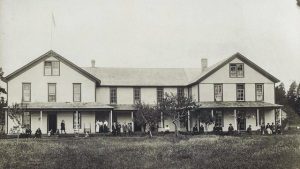 The Tokeland Hotel is the oldest hotel in Washington state, first opening for business in 1885. Despite its quaint surroundings on the Toke Point peninsula, the hotel is home to some very strange inhabitants. The ghost of a Chinese immigrant haunts the hotel grounds. He died in the building sometime in the 1930s due to smoke inhalation while running from smugglers. He wanders the halls of the hotel, and is mostly friendly, although things have been known to disappear around him every so often. The ghost of a cat also haunts the building. Guests claim to have seen the cat walk across their bed at night before disappearing into the walls. Room 7 is the most haunted of the hotel’s guest rooms, having been the site of a murder early in the hotel’s history. Guests who stay in Room 7 have complained of night terrors and the apparition of a dark shadow standing over their bed. Despite the haunts, the Tokeland Hotel is known for attracting clam enthusiasts who dive into Willapa Bay to search for the ever-popular razor clam.

Before the 1850s, Toke Point was inhabited by the Shoalwater Creek tribe, with very few, if any, European settlers. A gold prospector from Philidelphia named George H. Brown was one of the first to settle the area. The Brown family homesteaded over 1400 acres of land, ran several farms, raised livestock, and traded with the local tribes. Their daughter, Lizzie, even grew up speaking Chinook.

In 1885, Lizzie married William Kindred, and they built a two-story farmhouse that would later become the foundation for the Tokeland Hotel.

Birth of a New Town

The settlement on Toke Point was growing. The town built a post office in 1894, with a sign that said “Tokeland,” giving the town a name. The area had been named Toke Point in honor of Chief Toke of the Shoalwater tribe.

The Kindreds built an extra structure onto their farmhouse in 1899, expanding the livable area. They opened it up to the public as a hotel, calling it the Kindred Inn. They also opened a general store in the building. Soon after, William Kindred was appointed the Postmaster of Tokeland until 1915.

In 1910, the Kindreds decided to go big and greatly expand the size of their hotel. They constructed an additional wing, added a second fireplace, and brought gas and electric lighting to the building. The plumbing was upgraded, as was the interior. The Kindreds also extended the dining hall to fit more patrons.

Several amenities were added to the Tokeland Hotel, including a gun club and a nine-hole golf course complete with a clubhouse. The golf scene was thriving in the coastal Northwest, and the Tokeland Hotel was quick to take advantage. The golf club was designed with the help of Walter Fovargue, a professional golfer and one of the founding members of the PGA. Fovargue was a Tokeland resident and spent much of his time golfing at the hotel. In 1933, the clubhouse was officially named the Capitan’s Tavern.

The Tokeland Hotel helped spur tourism in the area. The Washington coastline was well known up and down the West for its fishing, fresh oysters, and clams. William Kindred himself would carry tourists via horsedrawn carriage from the train station or docks to the Tokeland Hotel.

The 1930s were tough for the Kindreds and their hotel. Several storms and floods slammed the Northwestern coat, damaging the hotel. The Great Depression also caused a significant drop in tourism. The Tokeland Hotel was going through its roughest era yet.

In 1931, Lizzie Kindred passed away, just one year after her and William’s 50th anniversary. William followed suit in 1943, having already willed away the hotel to his best friend, Effie Reinkins.

Today, the Tokeland Hotel is touted as the oldest operating hotel in Washington state. There’s a total of thirty guest rooms, each with a huge window so the guests can catch a beautiful view. It’s a popular base for those who enjoy razor clamming. The hotel’s restaurant even has its own recipe for clam chowder using locally sourced clams.

Haunts of the Tokeland Hotel

Being the oldest hotel in Washington state, the Tokeland Hotel is noted for its history, as well as being home to several ghosts! Quite a few spectres call this historic hotel home, and guests often report all manners of strange phenomena within the walls of the building. Rooms 4 and 7 are said to be the most paranormally active rooms in the building and are designated as “Haunted Rooms.” Interestingly enough, both rooms are pet-friendly.

The most encountered ghost is that of a man named Charlie. The story goes that Tokeland was often used as a landing spot for smugglers who trafficked illegal immigrants from China, many of which were coming to work the railroads. One night, as a smuggling ship was arriving onshore, Charlie jumped ship and ran from the smugglers. He ended up in the Tokeland Hotel, and the Kindreds helped him hide out in a secret compartment behind one of the fireplaces until the coast was clear. Unfortunately, someone turned on the fireplace while he was in hiding, and Charlie died of smoke inhalation.

Charlie’s ghost has been roaming the halls of the Tokeland Hotel ever since. Despite the circumstances of his death, Charlie is a rather friendly ghost. He’s often seen strolling through the halls of the hotel. Things are known to disappear when he’s around, and Charlie’s also known to spin some of the dinner plates in the restaurant, occasionally dropping them on accident.

The ghost of a cat is also known to haunt the hotel. Nobody knows where the cat came from, but many suspect that it was the cat seen in an old photo with William and Lizzie Kindred. The cat has been seen sitting in front of the hotel at night. Its also known to wander from room to room, walking across the beds and vanishing through the walls.

Room 7, the more haunted of the two rooms, is said to have been the site of a murder. The details of the killing are fuzzy, but many who stay in Room 7 have had horrifying nightmares and feel a sense of overall dread if they stay in the room too long. A few guests claim to have seen the shadow of a tall man standing over their bed at night.

The current owner of the Tokeland Hotel, Katherine White, describes herself as a bit of a skeptic. Nevertheless, she’s had some firsthand experiences with the ghosts that haunt her hotel. She said she came face to face with Charlie, who appeared to her as a hazy white apparition on the second floor. Another time, she claims that Charlie closed the latch on the storage room, locking her inside.

Other guests claim to have seen apparitions in the vicinity of the Tokeland Hotel. The ghost of a fisherman has been spotted on several occasions, usually by children. He’s said to appear as an older man wearing overalls and a fishing cap. The top half of his body is usually visible but then becomes transparent from the waist down. One guest claims to have seen the residual ghosts of a military radio outpost in one of the guest rooms.

Willapa Bay is a long way from Seattle, but the wilderness of the Pacific Northwest can hold some equally horrifying treasures. Swing up to Ollala and spend a night at Starvation Heights, where a diet of strict fasting can boost your health! Dr. Linda Hazzard and her husband killed over 18 people here, and possibly many more. Dozens fell for her fraudulent claims, where she attempted to cure her patients with extreme starvation and torture. Check out the Rucker Mansion! Located in Everett, the extravagant home belonged to the Rucker family, pioneers of the Pacific Northwest. The ghost of Jane Rucker has haunted the house ever since committing suicide just a few years after moving in. Thornewood Castle is a bonafide English estate in the forests just outside Tacoma. Built by Charles Thorne in 1911, the ghosts of the Thorne family occasionally make their appearance visible. They’re known to host phantom gatherings every once in a while, and no, you’re not invited! Want to see more haunts in the Evergreen State? Check out the top ten haunts in Washington state right here!