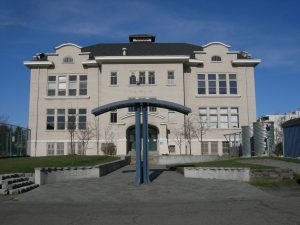 University Heights hosts numerous community events, from farmer’s markets to theatrical plays and even a Japanese language school. But it’s also home to several phantom poltergeists, all of which are the ghosts of children who attended school in the building decades earlier. They tend to appear in the dead of night, and witnesses claim to have seen the apparitions of children running through the halls and playing in the front courtyard. Laughter can also be heard echoing through the building. One ghost in particular is that of a boy named Brian. His teacher locked Brian in the closet for misbehaving. She forgot about him over the weekend, and he was found dead when classes resumed. Brian’s ghost has been seen in the classroom where he died, and visitors often feel intense feelings of dread upon entering the room. University Heights was built in 1902 to accommodate the rapidly growing community around Portage Bay. Today, the building is one of Seattle’s historic landmarks, right in the heart of the University District and an important community center in the city.

The north shore of Portage Bay, then called Brooklyn, was sparsely settled at the turn of the century. When the Latona Bridge was built in 1892, it connected the Capitol Hill neighborhood to Brooklyn. At the time, the University of Washington was located Downtown. The university was in a state of high growth and necessitated a second campus. Having just been annexed by the city, the area around Brooklyn seemed like the perfect place to set up shop.

The University Heights building was constructed in 1902, and the elementary school opened a year later. The building was expanded as it grew, with nearly 900 students in attendance by the 1920s. Enrollment began to decline when John Marshall Junior High was built nearby, as the 7th and 8th-grade students were redirected.

The school’s enrollment continued to decline. By the 1930s, only 400 students attended University Heights. Over the next few decades, the school changed its curriculum. A program for deaf children was created in the 1950s. The 1960s saw the institution of a multicultural curriculum. In the 1970s, an individualized learning program was created to tailor to the needs of particular students. The University Heights Alternative Program was then created to emphasize critical thinking in students and utilized small class sizes to better help students grasp the material.

In the 1980s, low enrollment caused the city to consider closing University Heights. Still seeing the value of the school, a coalition of students, parents, and faculty banded together to petition to keep the school open. “Be cool, save our school” became the school’s motto as weekly protest marches around the building brought attention to the cause. Even with the huge outpouring of support to keep the school open, the city still shut it down in 1989, citing a lack of attendance.

The protests continued even after the school’s closure. Local activists started the University Heights Center for Community Association in 1990. They constantly fought to reopen the school, using protests, petitions, and letters to the city government, pleading local officials to take action.

After the initial closure, the building remained vacant for nearly two decades. It wasn’t until 2009 that activity around the building started up again. University Heights was bought from the Seattle School district with funds raised by the State of Washington, King County, and the City of Seattle. The building was listed as a National Heritage Site by the US Department of the Interior.

Over the next decade, the building was repaired and renovated, with the surrounding plaza being opened in 2016. University Heights formed a nonprofit that manages the affairs and events of the building. Several organizations are housed in the building, including six schools and several extracurricular programs.

University Heights is home to numerous educational, artistic, and community-oriented organizations. The Broadway Children’s Theatre is a place for children between the ages of 5 and 18 to learn the ins and outs of theatre and live performances. Three Dragons Academy is an alternative education school that reaches out to young students using the power of art.

The Academy for Precision Learning is a school for children on the autism spectrum. The Yugakusha School is a Japanese language program geared towards students of Japanese descent who wish to have a traditional learning experience. Two other schools for young children are also housed within University Heights.

University Heights is also home to one of Seattle’s many P-Patches; urban farms where residents are free to rent a plot and grow their own plants, edible or otherwise. The Neighborhood Farmer’s Market Alliance is also hosted on campus. The building even hosts a homeless outreach organization called the Seattle Displacement Coalition.

The Ghosts of University Heights

With the history of University Heights spanning over a century, the building is bound to be inhabited by ghosts and spirits. As a matter of fact, it’s one of the most haunted buildings in Seattle. As University Heights has always been a school, the ghosts who reside in the building are exclusively children. Most are friendly, apart from the ghost of a young boy who died a tragic death on the school grounds.

During the early history of University Heights, there was a student named Brian, who was known for being quite unruly. Constantly misbehaving, he attracted the ire of his teacher. One day, on a Friday, Brian was especially boisterous. His teacher was fed up, so she locked him in the classroom closet to punish him, hoping that he would behave once released. The bell rang, and classes came to a close. Brian had fallen asleep in the closet, and he was unaware that the school day had ended. The rest of the students went home for the day. The teacher, having forgotten about Brian, had left the school as well.

When classes resumed on Monday morning, the teacher opened the closet door to retrieve her supplies. To her horror, she found Brian’s body, curled up in the corner. He had died from starvation and thirst, having been deprived for three days in the tiny closet.

Brian’s ghost has haunted University Heights ever since. He’s most often seen in his former classroom, usually sitting at his desk waiting patiently for class to begin. He can also be seen walking the halls at night or hiding in certain bathroom stalls. Several people have been startled by his presence, which they say carries a terrifying aura. Some have reported a deep fear right before his ghost appears. Those brave enough to enter the closet where he died claim to feel intense anger and deep sadness, emotions most likely brought upon by his tragic death.

In contrast to Brian’s angry spirit are the ghosts of several other children from the golden days of University Heights. Phantom children have been spotted running around the halls at night, eager to get to class. Others have seen apparitions playing in the front courtyard or playground. These spirits are relatively light-hearted and pay no mind to the living. It’s possible that these are residual ghosts, memories of people long gone which have been etched into the temporal fabric of University Heights.

The Emerald City is changing. The old days of grungy Seattle are quickly being replaced by the squeaky clean tech bros gentrifying the city streets. Brand new shimmering high-rises hang over the old brick and mortar buildings of the old days. But the city’s history still lives on, in an ethereal form nonetheless. Ghosts and phantoms haunt the city of Seattle, and they’re more common than you think! Check out the spooky Seattle Underground! The dark tunnels were once at street level until a devastating flood forced engineers to raise the city streets twelve feet into the air. The Underground became a seedy hangout for all sorts of characters. Today, the ghosts of sex workers, opium dealers, and mafia gangsters roam the musty corridors of the Underground. Spend a night at the Hotel Ändra! Now a quaint Scandinavian-inspired hotel, the building was a haven for criminals during the Great Depression. Shootouts, murders, suicides, and wild parties were the norm, and their ghosts still live on. Phantom jazz parties have been reported on the ninth floor. How bout we grab a drink at Re-Bar? Too Bad! They shut their doors for good in early 2021. Doesn’t mean that you can’t read about the bar’s role as a safe space in the LGBTQ community, or about how Nirvana held their album release party there. The ghost of a 70s leather daddy roams the building, and boy, is he a wild one. Wanna see more Seattle haunts? Check out the top ten most haunted spots in the city right here!